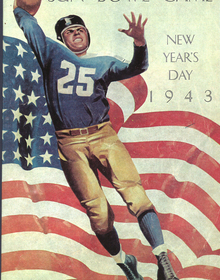 The 1943 Sun Bowl featured the only two undefeated teams in the nation– the Hardin-Simmons University Cowboys (9-0-1) and the Second Air Force Bombers (10-0-1).

Leading the nation in rushing offense, Hardin-Simmons was favored slightly heading into this game. The nation’s leading running back Rudy “Little Doc” Mobley set the NCAA rushing record with 1,281 yards in 1942.

The Cowboys were chosen for the Sun Bowl as Border Conference champions, but lost their head coach in the process. Coach Warren B. Woodson was called as an officer to active duty before the contest and the Cowboys would be coached by his assistant, Clark Jarnagin. At 28, Jarnagin became the youngest man ever to coach in a postseason bowl game. The 1943 Sun Bowl was dubbed as the “Win for Woodson” Bowl.

Mobley intercepted a pass from Washington State’s Billy Sewell in the second quarter and dashed 66 yards to the Air Force 9-yard line, but the Cowboys failed to score.

Second Air Force regained possession but was unable to gain a first down. The Bombers punted out to their own 19-yard line.

On the subsequent play, Camp Wilson ran for a touchdown in the second quarter to give Hardin-Simmons the lead 7-0.

In the third quarter, the Bombers’ Victor Spadaccini dashed into the endzone from the one-yard line. Albert Bodney missed the conversion and the Cowboys still led.

A pair of fifteen-yard penalties against Hardin-Simmons gave Second Air Force some added momentum. The two Minnesota teammates, Harold Van Avery and Spadaccini, went into action and ended a combined aerial and ground drive with Van Avery scoring the winning touchdown. Bodney was able to convert the extra point attempt this time.

Van Avery, who later played with the Green Bay Packers, led the Bombers with one touchdown, racked up fifty-three yards in fourteen carries and completed four of seven passes for a net of 163 yards.

Hardin-Simmons entered the game averaging an NCAA-best 307.4 yards per game rushing, but the Bombers held the Cowboys to just 148 yards on the ground that day. Mobley was held to just 44 yards in 11 attempts against a fierce Second Air Force defense that averaged 205-pounds per lineman. El Paso native and the Cowboys freshman fullback Wilson carried the ball 24 times for 104 yards in a losing cause.

The aerial attack proved to be a crucial factor in the Second Air Force triumph over Hardin Simmons. The Bombers converted for 176 yards of passing while the Cowboys managed only 41.