When teams from the ACC and Pac-12 meet on the field on December 31, 2020, it will mark the 87th edition of one of the oldest traditions in college football history, the Tony the Tiger Sun Bowl.

Since the first Sun Bowl played on January 1, 1935, as a fundraising event for a local service club, the game has grown into El Paso’s number one national attraction. With its picturesque stadium nestled between two mountains it has become a piece of the Southwest and a lesson in history.

For the last 84 years, the Sun Bowl has featured the color and pageantry that is college football. Seven of the top 10 winningest programs of all-time have participated in the Sun Bowl and 30 college programs that have won national championships in the past have appeared as well. Through the years, 38 Sun Bowls have been decided by a touchdown or less, including six of the last 11 games. Through its first 82 years, the Tony the Tiger Sun Bowl has featured 78 different programs, more than any other bowl in the nation.

The gridiron generals have loomed large on the sideline. Sammy Baugh was here, but so was Tom Osborne, Barry Switzer, Bob Devaney, Grant Teaff and Don Nehlen. Hall of Famers from across the nation have been to Far West Texas in late December and early January. Alabama’s Nick Saban has been here and so has Texas’ Mack Brown.

The Sun Bowl has also produced some exciting and somewhat strange moments as well. Who can forget the infamous “Fog Bowl” of 1974, when a freak winter storm the night before the game left frost on the field? The morning warmth of the sun created a rising steam from the field during the first half, thus giving it its name – “The Fog Bowl.”

In 2006, Oregon State’s two-point conversion with 23 seconds left proved to be the deciding moment. It will forever live in Sun Bowl lore. 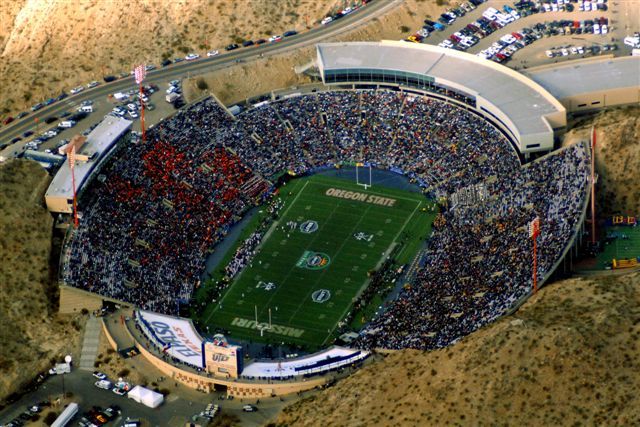 In 2009 we saw Oklahoma and Stanford in a see-saw battle, which the Sooners won thanks to the play of Ryan Broyles. The speedy wideout became the first player in Sun Bowl history to be named the C.M. Hendricks Most Valuable Player and the John H. Folmer Most Valuable Special Teams Player. There are moments that capture the nation’s imagination and the Sun Bowl has had a few.

The 2015 Sun Bowl was titled the “Snow Bowl” by the media as snow came pouring down. It was the second time that Miami played in the Sun Bowl with the snow following the team. The first time was in 2010 when snow covered El Paso during a sell-out game against Notre Dame.

There was the time Lee Corso and Buddy (Burt) Reynolds played in the same Florida State backfield in 1955. Or there was the time that No. 17 George Washington in 1957 upset Texas Western (now UTEP). 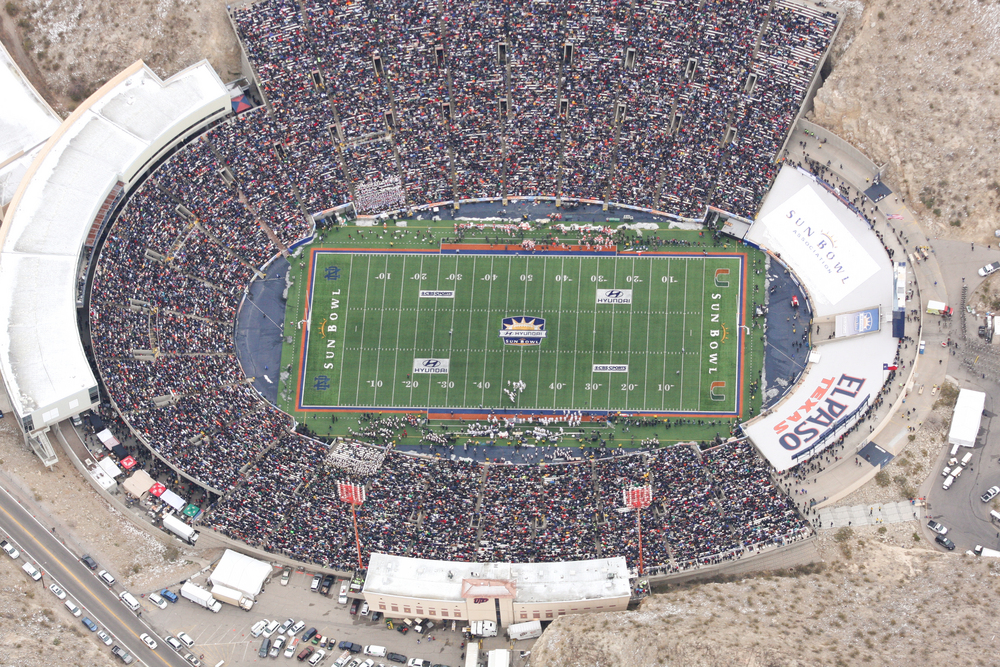 Locals recall Priest Holmes’ four touchdowns to lift Texas over North Carolina in 1994, in what was voted the greatest Sun Bowl ever played. The irony is that North Carolina’s head coach is currently the head coach at Texas – Mack Brown.

It is about the moments that fans remember and leave with. It starts as just a trip to El Paso, but they leave with a lifetime of memories. Schools big and small have trekked to the Southwest to support their teams like Alabama, Texas, Nebraska, Oklahoma, Florida, West Virginia, Virginia Tech and so many more. In all, 77 schools have made 156 appearances in El Paso.

There have been many memorable games over the years, but none of this would have ever have been possible if it had not been for the vision of the El Paso Kiwanis Club.

The Sun Bowl was first played to benefit underprivileged children and to finance improvement to the El Paso High School Stadium.

On October 18, 1934, at a meeting of the El Paso Kiwanis Club, Dr. Brice Schuller suggested that the club sponsor a football game on New Year’s Day matching an El Paso High School All-Star Team against a worthy opponent. The motion was passed unanimously. It was decided to ask for public suggestions as to the name of this annual game, and the name “Sun Bowl” was submitted by Doctor C. M. Hendricks, who became the first Sun Bowl Association President. The following year a weeklong schedule of events was added to the Sun Bowl festivities, and four other local service clubs (Rotary, Lions, Optimist and Active 20-30) joined the Kiwanis in coordinating the entire “Sun Carnival” calendar.

The Sun Bowl Association was founded in 1934 with a threefold purpose: 1) to present a football attraction of national importance, 2) to promote El Paso and the Southwest and 3) to generate tourist income for the area. Economic impacts study by Dr. David Schauer of the Economics Department at the University of Texas at El Paso revealed that the direct economic impact to this area from the bowl game is 12 to 15 million dollars. This figure does not include the value of the national media exposure resulting from the game.

In 1936, New Mexico State and Hardin-Simmons Universities were invited to play, and the Sun Bowl has been a college game ever since. During the early years of the Sun Bowl it was a tradition to match the Border Conference Champion against the best available opponent. Today, the Sun Bowl matches a Pacific-12 Conference versus the Atlantic Coast Conference.