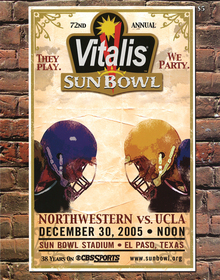 UCLA came back from a Sun Bowl-record 22-point deficit to upend Northwestern, 50-38, in the highest scoring Sun Bowl ever.

The game featured two defensive touchdowns for Northwestern and two on-side kicks for touchdowns for UCLA, as the two teams combined for over 1,000 yards of offense on the day.

UCLA dug itself in a whole early, when Drew Olsen threw a pair of first quarter interceptions that were returned for touchdowns. The irony is Olsen had only thrown three picks all season and had the highest touchdown to interceptions ration in the nation — 25:3.

Special teams lapses seemed to be the demise of Northwestern, as the Wildcats gave up a pair of touchdowns in the fourth quarter when UCLA’s Brandon Braezell took two on-side kicks for touchdown runs of 42 and 45 yards, respectively. Northwestern also failed to convert three point-after attempts in the game.

UCLA’s Kahlil Bell and Chris Markey were named the C.M. Hendricks Co-Most Valuable Players after they helped the Bruins pound out 310 yards rushing on the day. Bell finished with 136 yards and two touchdowns on 19 carries, while Markey had a game-high 161 yards on 24 carries.