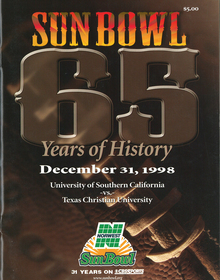 Though TCU had only six wins throughout the season, the Horned Frogs were able to appear as a result of the Big Ten not having a No. 5 bowl-eligible team to send to the game. The win was TCU’s first bowl win in 41 years.

USC linebacker Chris Claiborne was the 1998 Butkus Award Winner and was a unanimous All-American.

USC’s Carson Palmer would go on to capture the Heisman Trophy in 2002.

TCU’s LaDainian Tomlinson would go on to win the Doak Walker Award and become an All-American selection in 2000. He was named to the 75th Anniversary All-Sun Bowl Team as a kick returner.

The 46,612 in attendance ranked as the eighth largest crowd in Sun Bowl history at the time.