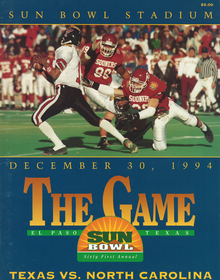 This game could have reminded Texas fans of the 1982 match-up with North Carolina when the Horns let a fourth quarter, four-point lead blow away for a Tar Heel victory.

The Longhorns led 21-17 in the first half led by junior Priest Holmes, who rushed for 161 yards (a new Sun Bowl record) and two touchdowns. Riddled with four punts and two possessions lost on fourth downs, the third quarter remained scoreless by both teams.

The fourth quarter opened with a 82-yard punt return (longest in Sun Bowl history) by junior Marcus Wall to give the Tar Heels a three-point advantage. After a three and out Texas drive, the subsequent UNC possession resulted in a 50-yard connection from junior Mike Thomas to freshman wide receiver Octavus Barnes for a touchdown.

The Longhorns would recover quickly as Priest Holmes rushed for 51 more yards and two touchdowns. With 1:17 left in the game, the Tar Heels felt the pressure to mobilize their offense.

Instead, a Thomas pass would be intercepted by sophomore Chris Carter. Carter ran for 69 yards before fumbling on the UNC 20 to allow the Tar Heels to regain possession with 29 seconds left. With a lot of ground to cover, Thomas attempted four deep passes to no avail and the ball was given up on downs with two seconds left in the game.

The Texas comeback was led by Holmes who finished with four TDs and scoring 24 points (tying Sun Bowl records held by Thurman Thomas) and garnered the C.M. Most Valuable Player Award. Texas’ All-American tackle, Blake Brockermeyer, was named Most Valuable Lineman for his stellar blocking for Holmes and staunch pass blocking.