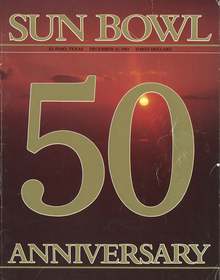 The 1983 game, the 50th to be played, featured the highest-ranked team in Sun Bowl history. Ranked sixth in the nation by the Associated Press, the Southern Methodist Mustangs (10-1) faced off against the Alabama Crimson Tide.

Alabama made its 25th consecutive bowl appearance and the 28-7 victory over the Ponies was the school’s 20th bowl win, tying USC for an NCAA record.

The most lopsided upset of the Sun Bowl was also the coldest. The temperature at kickoff dipped to 24 degrees and the winds blew at 15 miles per hour, gusting up to 35.

Alabama quarterback Walter Lewis was named the game’s C.M. Hendricks Most Valuable Player, completing nine of 14 passes for 148 yards, throwing for one touchdown and rushing for another. Wes Neighbors, the Alabama freshman center, was named the Jimmy Rogers, Jr. Most Valuable Lineman.

The Crimson Tide exploded in the first half with four consecutive touchdowns. Ricky Moore rushed for the first two and Lewis for the third. With 43 seconds left in the half, Alabama’s Joey Jones scored on a 19-yard pass from Lewis to expand the lead to four touchdowns, 28-0. That final possession was the result of an interception by freshman Freddie Robinson.

In the first half, the Alabama defense held SMU to only 105 total yards, recovered two fumbles and picked off one interception.

However, the Mustangs were only able to put together one touchdown drive – a three-play, 78-yard, 20-second drive at that. Momentum was built by freshman Jeff Atkins as he broke through the center of the field and sprinted 58 yards to the Alabama 15-yard line. Then, McIlhenny struck split end Marquis Pleasant for SMU’s lone touchdown.