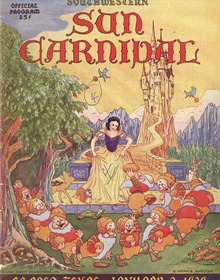 Utah showed its power quickly when it climaxed a 58-yard drive with a touchdown by Tom Pace, who skirted his right end on a lateral from Ray Davis.

With one minute of play remaining in the first quarter, Utah’s Ray Peterson intercepted Finlay MacGillicray’s aerial on Utah’s 36-yard line and raced to a second score. Bernard McGarry kicked both extra points.

The rambling Utes, with Peterson and Gene Cooper leading the attack, galloped to another score in the second quarter, as Peterson plunged over from the six-inch line on fourth down.

New Mexico’s only scoring threat in the first half bogged down midway in the opening period, when Finlay MacGillicray fumbled a pass on Utah’s 42-yard line and the Utes took over.

Clarence Gehrke, Utah halfback, took charge of the fireworks in the final quarter as a climax to a Ute 61-yard rampage. He piled over for the touchdown from the 10 after putting the ball in scoring position with a 15-yard run and a lateral to Melvin Nawman.

McGarry was the day’s important casualty, the Ute tackle and captain received a fractured arm in the fourth quarter when he tackled Bill Dwyer, New Mexico’s crippled backfield star who played only a few minutes.

New Mexico was outclassed from the opening gun. The Utes rolled up 16 first downs to 12, gained 379 yards from scrimmage to 179, and intercepted four Lobo passes.

The Lobo pass attack, with MacGillicray and Reid Monfort on the hurling end, failed to click for the only time this season.

New Mexico held matters on even terms most of the third quarter, but narrowly averted another Ute score just before the whistle. McKissick, Turner, and Tom Pace spearheaded a Utah drive to New Mexico’s five, but a pair of five yard penalties halted them.

The weather, spiced by a hot sun, was hard on both teams, and toward the close of the battle the heat seemed to have taken greater toll of New Mexico than Utah. The Lobos were dragging in their tracks.

This marked the fourth straight year that the Border Conference champion (the host team) had played in the Sun Bowl without winning (one tie and three losses). Utah finished the year 7-1-2, while New Mexico closed out the season 8-3-0.