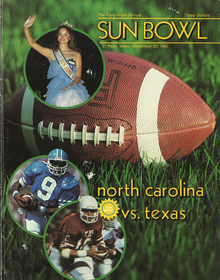 With the wind chill at 12 degrees on Christmas day, the 49th Annual Sun Bowl was one to remember.

No. 8 Texas (9-2), who making its third trip to the Sun City in five years, looked as if it had the game in hand, but a fourth quarter surge by North Carolina led the Tar Heels to a 26-10 win over the Longhorns.

The Sun Bowl also saw snow falling for the first time since 1947 during a game, but with the wind chill, it was the coldest Sun Bowl on record.

Texas jumped out to a 10-3 halftime lead thanks to a blocked punt recovery by Ronnie Mullins and a Raul Allegre field goal.

But then when Texas twice failed to score from the one-yard line, momentum swung to North Carolina.

The Tar Heels scored 23 unanswered points in the fourth quarter to stun the Fred Akers’ troops and 29,055 who braved the weather to witness the event. UNC scored on five consecutive fourth quarter drives.

Sophomore Ethan Horton, a third string tailback, was pressed into service after injuries to the Tar Heels’ top two runners and managed 27 carries for 119 yards and rushing for one touchdown. For his efforts, Horton was named the C.M. Hendricks Most Valuable Player.

Mullins, who scored Texas’ only touchdown on a blocked punt, was named the Jimmy Rogers, Jr. Most Valuable Lineman.

The 1982 matchup was the second highest television rating among the bowls with a 13.3 and gaining 42 percent of the market share.