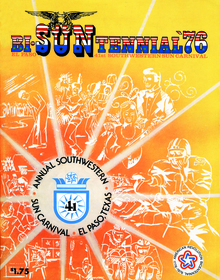 The sun seemed to shine only on No. 20 Pittsburgh as they displayed an impressive rushing performance to overpower No. 19 Kansas 33-19 in the first sellout in Sun Bowl history. The matchup featured two of the most notable collegiate players: Tony Dorsett of Pittsburgh, who would win the Heisman Trophy a year later, and Kansas’ Nolan Cromwell.

On its first possession, Kansas scored on an 82-yard play that involved an option run by Cromwell and a pitch to Bill Campfield who raced into the end zone. But Cromwell’s pitch was ruled an illegal forward pass and the touchdown was erased to force a Jayhawk punt.

After a missed Pitt field goal, Kansas drove to the Pitt 16 for fourth and inches. Cromwell thrust himself ahead on a sneak and seemed to have the first down. But the officials ruled Pitt had held on the play, and did not bother to measure despite protests from KU coach Bud Moore.

Upon regaining possession on downs, Panther fullback Elliot Walker took advantage of a pitchout and broke through three tackles for sixty yards for a touchdown. Kicker Carson Long made the point after and the Panthers took a lead they would never relinquish.

Two miscues involving a Kansas interference call on a punt return and a Cromwell fumble led to All-American tailback Tony Dorsett’s two touchdowns in the second quarter to end the first half 19-0. Though usually successful, the Kansas wishbone offense simply could not produce against the tough defensive enforcement.

The second half proved to be more successful for the Jayhawk offense scoring three touchdowns, but their defense could not contain the Panther running attack. Kansas running back Laverne Smith recorded two touchdowns and Scott McMichael and Skip Sharp connected for another score to lead an attempted Jayhawk comeback effort that fell short.

The errors and penalties made in the first half were too costly and any adjustments made at the half were not enough to squander the momentum of the Panthers’ 33-19 victory.