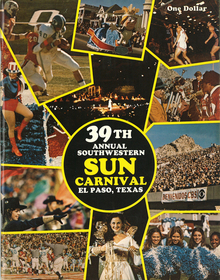 Missouri dominated the rushing game with 295 yards and outproducing Auburn 390 yards to 233.

After a scoreless first quarter, Missouri fumbled on its own 49-yard line to set up an Auburn field goal.

Able to only produce one first down, Missouri punted. On the first down after the reception of the punt, Auburn’s Rick Neel fumbled on the 35-yard line. The next play was a touchdown pass from Chuck Link to John Kelsey to pull Missouri ahead.

On Auburn’s next possession, quarterback Wade Whatley fumbled the handoff on the second down. Mizzou’s McRoberts recovered on the 24-yard line. Back-to-back gains of 11 set up a Bybee two-yard run into the endzone.
Auburn regained control of the ball, but punted it right back on the fourth play.

Missouri scored again when quarterback Ray Smith tossed a short pass to John Kelsey who was all alone in the endzone.

Kicker Greg Hill converted on each point after attempt to bring the score to 21-3.

Auburn received the ball with 3:08 left in the half and drove 80-yards in three minutes. Thomas Gossum caught a 17-yard pass from understudy quarterback Phil Gargis for the score and Roger Pruett added the point after to narrow the lead to 21-10.

Chris Wilson kicked off to Missouri’s John Moseley who returned the ball 84 yards for the touchdown as the final eight seconds of the first half expired for a 28-10 lead.

Continuing the Auburn misfortune, Gargis fumbled the pitch on the Auburn 35. Missouri quickly punished the mistake with a Smith 15-yard strike to Jim Sharp.

Auburn was able to counter with two key passes from Gargis – a 21-yard pass to Spivey good for 21 yards and a 32-yard touchdown reception from Gossum with 34 seconds left in the third quarter. Pruett’s kick narrowed the lead to 34-17, but Auburn would not get any closer.

Neither offense could produce any further points in the fourth quarter.

Bernich led defensive stats with 18 tackles, six of which were unassisted.

The game, although usually sunny, was unusually warm with a high reaching 71 degrees at kickoff.