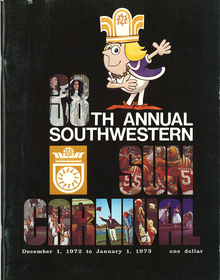 North Carolina (10-1-0) entered the Sun Bowl ranked 14th in the nation and champions of the Atlantic Coast Conference, while Texas Tech (8-3-0) finished as the runner-up of the Southwest Conference. The Tarheels edged a 32-28 victory over the Red Raiders in the fourth quarter.

An unusual play proved to be the most critical of the game. In the second quarter, a blocked North Carolina punt was returned for an apparent Texas Tech touchdown. However, it was called back by an unsportsmanlike conduct penalty. The officials ruled that a Texas Tech coach was on the field during the play.

Texas Tech was able to score 21 unanswered points to take a commanding 21-9 lead, but North Carolina fought back.

Nick Vidnovic and Ted Leverenz combined for two touchdown receptions in the second half. Billy Hite added a three-yard rushing touchdown, but a successful two-point conversion was also a Vidnovic-Levernez connection. Alexander made one extra point attempt but missed the second to give the Tarheels just a two-point lead with one minute remaining in the game.

Texas Tech needed a miracle to get into field goal range. Instead, North Carolina’s ferocious defense sacked quarterback Joe Barnes on second down in the endzone for a safety with 43 seconds remaining.

North Carolina went up 32-28 and was now in complete control of the game. Texas Tech kicked off and Vidnovic held on to the ball until time expired.