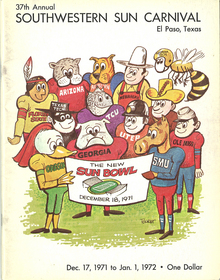 No. 10 Louisiana State ambushed No. 17 Iowa State in the second half to win 33-15 in the first ever Sun Bowl sellout.

The only scoring in the first half was a pair of LSU field goals and one by ISU. Led by Jimmy Rogers, Jr. Most Valuable Lineman Matt Blair, the Iowa State defense stood firm against the Tigers, including a first-half goal-line stand.

In the second quarter, LSU All-American quarterback Bert Jones hit Andy Hamilton with a 77-yard pass to put the ball on the Iowa State four-yard line. However, the Tigers could not convert and the Cyclones took over on downs to end the half.

LSU entered the second half with a new enthusiasm led by C.M. Hendricks MVP Jones who completed two touchdown passes. The first was a 37-yard strike his cousin, Andy Hamilton. The second was a 21-yard toss to Gerald Keigley. Kicker Jay Michaelson nailed the first extra point attempt, but missed the second to bring the score to 19-3.

Iowa State countered with a Dean Carlson 30-yard touchdown pass to Larry Marquardt late in the third quarter. The fourth quarter opened with another touchdown, a one yard toss to Keith Krepfle from Carlson. The score was 19-15, but LSU was ready to extend the lead.

Jones threw his third touchdown pass of the game to Michaelson midway through the fourth. The LSU quarterback further added to Iowa State’s misery rushing for a touchdown of his own with 3:00 remaining in the game. The final was 33-15.

The Tigers were led by Jones, two-time All-American cornerback Tom Casanova and Lombardi Award finalist Ron Estay. Jones completed 12 of 18 passes for 227 yards, threw three touchdowns and rushed for one. Hamilton caught six passes for 165 yards and one score. The 1971 LSU defense allowed the fewest yards in the nation.

The Cyclones were led by head coach Johnny Majors, who would later bring two other teams to the Sun Bowl – Pittsburgh and Tennessee. George Amundson was the first Cyclone to rush for 1000 yards in a season, but the LSU defense held him to only 56 yards.