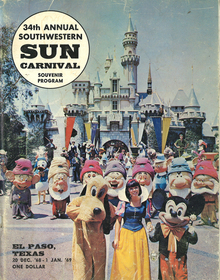 In their first ever bowl game appearance, Arizona committed too many mistakes against the fierce Auburn defense in the first Sun Bowl televised by CBS. The Tigers punished the Wildcats for several costly turnovers in a 34-10 victory.

All-American Buddy McClinton, Auburn’s all-time interception leader, recorded three interceptions, had six tackles and one touchdown off an interception-return to become the first defensive back to ever earn Most Valuable Player honors.

Auburn’s David Campbell, a 232-pound defensive tackle, was named the Most Valuable Lineman for his aggressive pass rush.

As if an omen had occurred, on the first play of the game Arizona’s Lee released the ball straight into the hands of
Auburn safety Don Webb. Two series later, McClinton seized his first of three interceptions. Despite the two turnovers, Auburn did not score until John Riley booted a 52-yard field goal, a then Sun Bowl record.

Auburn expanded the lead to 10-0 when quarterback Loran Carter struck Mickey Zofko for a 65-yard touchdown reception and John Riley added the point after.

Arizona retaliated in the second quarter with a 37-yard successful field goal from Steve Hurley to cut the lead. With 54 seconds left in the half, Arizona tied the game when Lee threw Hal Aranson a 12-yard pass for the first touchdown and Hurley connected the point after.

Auburn exploded in the second half scoring 24 unanswered points, 14 of which came within a span of 24 seconds. First, Tommy Traylor carried the ball for four plays with the final one resulting in a touchdown. Riley’s extra point to made it 17-10. Then, McClinton returned another pick 32 yards into the endzone. Riley’s point after kick extended the lead 24-10.

The fourth quarter demolished any hopes of a Wildcat resurgence as the Tigers tacked on a Loran Carter-Tim Christian 43-yard pass reception and a 41-yard John Riley field goal.

Both head coaches, Auburn’s Ralph Jordan and Arizona’s Darrell Mudra, would later be inducted into the College Hall of Fame.