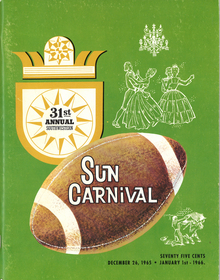 The Horned Frogs were first to score with a 35-yard field goal by Bruce Alford, Jr. TCU quarterback Kent Nix then threw an 11-yard pass to David Smith to boost the lead to 10-0.

The Miners revived during the second half and quarterback Billy Stevens, ranked second in the nation in passing, led the way.

In the third quarter, Stevens connected to flanker Chuck Hughes for a 35-yard touchdown.

On the next Texas Western possession, the Miners drove 70 yards to set up a 21-yard field goal by Joe Cook that tied the game at 10-10.

Late in the fourth quarter, a TCU fumble set up another Cook field goal to make the score 13-10.

The Horned Frogs did not give up and began driving again. Hopes of a victory were seized by the Miners when Nix was intercepted at the TWC one-yard line.

Deep within their own territory and less than a minute remaining in the game, Stevens took the intentional safety to give the Miners a free kick.

The game ended as a 13-12 Texas Western victory.

Stevens, named C.M. Hendricks Most Valuable Player, completed 21 of 34 passes for 208 yards and threw for one touchdown. Flanker Chuck Hughes finished the game with seven catches for 115 yards and one touchdown.