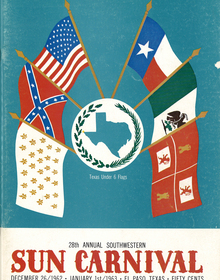 After a scoreless first quarter, Ohio got on the board first with a then-record 52-yard field goal by Jim McKee. WTSU answered with a touchdown on a 13-yard pass from Jim Dawson to Jerry Don Logan. The extra point gave the Buffaloes a 7-3 halftime lead.

The Bobcat defense accounted for the next score in the game, as Don “Skip” Hoovler intercepted a pass and returned it 91 yards for a score. The play stands as the longest interception return in Sun Bowl history and ranks as the fifth longest return in a bowl game all-time. Bob Babbitt completed a pass to Ken Smith for the two-point conversion to give Ohio an 11-7 lead heading into the fourth quarter.

Ohio extended the lead to 14-7 on McKee’s second field goal of the game – a 24-yarder. West Texas answered late in the fourth quarter on a halfback pass from Dave “Hoot” Gibson to a streaking Jerry Richardson, who went 32 yards for the score. The game was decided by a two-point conversion, when Dawson completed a conversion pass to Jim Ostrander to lift the Buffaloes to a 15-14 victory.

Logan, who recorded a 13-yard touchdown and a game-high six unassisted tackles, was named C.M. Hendricks Most Valuable Player. Hoovler was named the Jimmy Rogers, Jr. Most Valuable Lineman after his 91-yard interception return and recovering a West Texas fumble from his linebacker spot.

Two long runs in this game were a 62-yard, non-scoring effort by Dawson and a 59-yard run by Ohio’s Roger Merb. Pedro finished as the game’s leading rusher, after netting 105 yards on 14 carries. McKee set records for field goals, field goal attempts and the longest field goal, eclipsing the mark set in 1961 when Wichita’s Bill Seigle booted a 36-yarder.