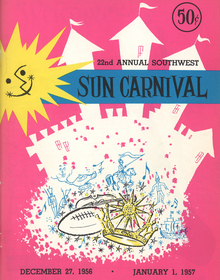 George Washington University became the first nationally-ranked team to play in the Sun Bowl, when the No. 17 Colonials came to El Paso. The game marked the first shutout in a Sun Bowl since Southwestern University blanked the University of Mexico in 1945.

The Miner defense was also strong in the game, but miscues by the offense led to both Colonial touchdowns. Twice the defense stopped George Washington inside the TWC 10-yard line, including a goal line stand at the six-inch line during the first quarter.

The tone of the game was set early, when George Washington recovered a fumble on the Texas Western nine-yard line. However, the Miner defense stood its ground, thwarting a Colonial score.

Though the Texas Western defense would keep George Washington out of the end zone, the Colonials would score soon after. The first touchdown came minutes later in the first quarter when quarterback Ray Looney struck Paul Thompson for a 30-yard touchdown. That would be all of the points that George Washington would need.

An interception by Ted Colna late in the third quarter set up the 3-yard touchdown run by Pete Spera just four plays into the fourth quarter, giving the Colonials a 13-0 win over the Miners.

Claude “Bo” Austin of George Washington carried the ball 18 times for 98 yards in the game, including a 47-yard, non-scoring run in the third quarter, to earn C.M. Hendricks Most Valuable Player honors.