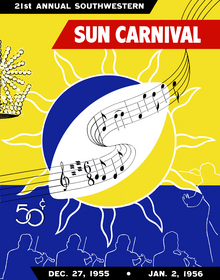 Wyoming, rated the underdog from anywhere between one to three touchdowns, pulled off a huge upset against Texas Tech in a fourth quarter come-from-behind victory.

Border Conference champion Texas Tech entered the game with a 7-2-1 record that included a win over Texas. Wyoming came into the Sun Bowl with a 7-3-0 from the Skyline Conference.

Following a score-tying Wyoming touchdown in the fourth quarter, an unfortunate turnover cost Texas Tech the game, as the Cowboys stormed from behind to take a 21-14 victory over the Red Raiders.

Wyoming had the been the first, and only, team to score in the second half when back-up quarterback Larry Zowada threw a 53-yard touchdown pass to John Watts. Pete Kutches nailed the extra point to lead 7-0.

Texas Tech tied the score when halfback Ronnie Herr capped an 80-yard drive with a 2-yard run into the endzone. Fewin added another touchdown run in the fourth. Kicker Don Williams succesfully kicked both extra point attempts to give the Raiders a 14-7 lead.

The Cowboys rallied back with a 13-yard pass from Larry Zowada to Bob Marshall and a good Kutches kick to tie the game at 14-14.

A disastrous fumble by senior halfback Don Schmidt was recovered on the four-yard line right after Wyoming’s kickoff. Tailback Pete Kutches recovered, and the Cowboys’ Ova Stapleton went across in three plays for the game-winning touchdown. Kutches’ extra point kick made the 21-14 final in favor of Wyoming.

Jim Crawford of Wyoming, who did not even start, was named the C.M. Hendricks Most Valuable Player after rushing for 103 yards on 18 carries. One year later, Crawford would lead the nation in rushing.