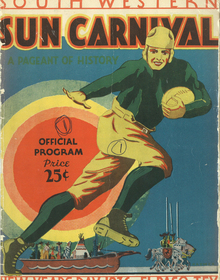 New Mexico State’s (7-1-2) only loss in 1935 came against Border Conference champion Arizona, 9-6. Hardin-Simmons’ three losses were to Texas Tech, Baylor and No. 18 SMU.

Both teams relied on defense all season, as each squad pitched five shutouts. The Cowboys (6-3-1) entered the game on a four-game winning streak, while the Aggies came to El Paso closing out the season 3-0-1.

Outmanned as usual, New Mexico State averaged only 175 pounds in the line, while HSU’s line weighed in at 188 pounds. The contest was a vicious, hard-hitting affair that included 10 fumbles, five picks, and an astounding NCAA record 29 punts. The Aggies, who finished with 18 first downs to 15 by the Cowboys, trailed 7-0 before tying the game early in the third quarter.

Hardin-Simmons then began a long drive featuring a rare fourth down gamble that led to a first down at their own 40-yard line. The Cowboys chipped away until fullback Ed Cherry dove in from one yard out to give HSU a 14-7 lead near the end of the third quarter.

The Aggies had driven into Cowboy territory several times only to be thwarted by interceptions or fumbles. Finally, quarterback Lem Pratt called a trick play that made use of the speedy Apodaca cousins. With the ball at midfield, Pratt passed to Hooky Apodaca at the 35 who whirled and fired a long lateral pass to Lauro Apodaca. Lauro, who had great speed, caught the ball and raced untouched into the Cowboy end zone. The extra point by Hooky was good, making it 14-14. Frantic last minute efforts by both teams to score went for naught, and fittingly, the game ended in a 14-14 tie.