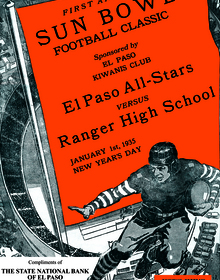 The inaugural Sun Bowl featured the No. 2 high school team in the state of Texas against the best players in the city of El Paso.

The El Paso All-Stars were made up of players from El Paso High, Bowie High, Austin High and Cathedral High. Ranger entered the game with their only loss coming against eventual state champion Amarillo.

El Paso opened the game with a 65-yard scoring strike from Ken Heineman to Gilberto Salcedo on the first drive.

The Bulldogs answered the score in the second quarter when fullback Rankin Britt busted loose on a 45-yard scoring run. The extra point was successful, giving Ranger a 7-6 lead at the half.

But then the momentum shifted thanks to Heineman.

The difference in the first-ever Sun Bowl classic was the third quarter when El Paso capitalized on three Ranger turnovers for their 19 points.

Ranger was driving to open the third quarter, only to fumble at their own 11-yard line. Heineman capitalized with a 7-yard touchdown run to give El Paso the lead for good.

On the next Ranger possession, an interception gave El Paso the ball at Ranger’s 41-yard line, setting up a 30-yard touchdown pass from Heineman to end George Crysler.

The third Bulldog turnover of the quarter was Heineman’s 70-yard interception return for a touchdown, giving El Paso a 25-7 lead.

The Bulldogs put together a pair of long scoring drives that culminated with quarterback Aaron Anderson darting into the end zone from one and three yards out to close the gap to 25-21.

El Paso ran out the clock and won the first-ever Sun Bowl in front of 3,000 fans at El Paso High School’s Jones Stadium.

In fact, Heineman touched the ball on every El Paso score. Heineman was named the 2003 Legend of Sun Bowl. Heineman went on to be a three-time Little All-American at Texas College of Mines (now UTEP) and played professionally with the Brooklyn Dodgers of the National Football League.