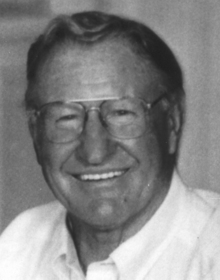 An El Paso native, Jesse Whittenton played with the Green Bay Packers under Vince Lombardi from 1958 to 1964. He was a three-time All-Pro Defensive Back for the Packers and played in three World Championship Games, two of which the Packers were victorious. Whittenton is a member of the Green Bay Packer Hall of Fame as well as the El Paso Athletic Hall of Fame. While at UTEP, he was selected to the All-Border Conference team as a quarterback in 1954 and 1955. Not only did he lead his team to winning seasons as a quarterback and defensive back, Whittenton also saw playing time as the Miners’ extra-point kicker. Whittenton led the Miners to back-to-back Sun Bowl victories over Southern Mississippi and Florida State in 1954 and 1955, respectively. He was named Most Valuable Player of the 1955 Sun Bowl and shares the Sun Bowl record for most touchdown passes (three). Whittenton was drafted by the Los Angeles Rams 1955. He was a defensive back for two years with the Rams before he began his stint with Green Bay. Since 1965, Whittenton has been a member of the Professional Golfers’ Association of America.