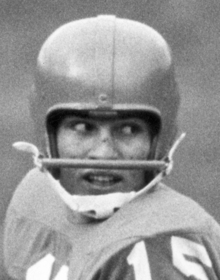 William S. “Bill” Stevens played collegiate football at Texas Western College (now The University of Texas at El Paso). While at TWC, he quarterbacked the Miners to two winning appearances in the Sun Bowl in 1965 and 1967. In 1965, Stevens completed a then-Sun Bowl record 21 of 34 passes for 208 yards and one touchdown. Two years later, he completed 13 of 26 passes for 155 yards and a touchdown to lead the Miners to consecutive bowl victories. Stevens was a two-time All-American, who established almost every UTEP passing record upon graduation. In each game he was named the Most Valuable Player, becoming the second player in Sun Bowl history to win the C.M. Hendrick Trophy twice. After his senior season, he was the NCAA’s all-time passing yardage leader. Bill graduated from UTEP in 1968 with a Bachelor of Science Degree in Education. He played professional football for four seasons with the Green Bay Packers and Chicago Bears before returning to El Paso to teach, coach, and then later enter into the banking profession. He still holds several passing records at UTEP.