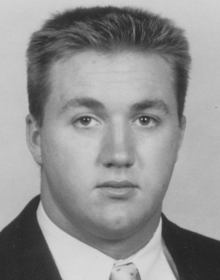 Alex Van Pelt led the University of Pittsburgh to one of the most memorable comebacks in Sun Bowl history when he helped the Panthers upset Texas A&M, 31-28 at the 1989 Sun Bowl. Van Pelt, who started every game as a freshman, went on to start 46 consecutive games for the Panthers, a record that still stands today at Pittsburgh. He is the third person with Pittsburgh ties to be inducted into the Legends of the Sun Bowl, joining Johnny Majors (1995) and Tony Dorsett (1996). Majors coached in three Sun Bowls including the 1975 Sun Bowl that Dorsett played in for the Panthers. Van Pelt was in a groove that day in 1989, as he completed 20 of 40 passes for 354 yards and two touchdowns, including the game-winning 44-yard scoring strike to Henry Tuten with just over two minutes to play. Van Pelt was a four-year starter for Pittsburgh (1989-92). He was a finalist for the Davey O’Brien Award and the Johnny Unitas Award in 1992 and was selected to play in the Blue-Gray Game and Senior Bowl. Selected in the eighth round of the 1993 NFL Draft by the Pittsburgh Steelers, Van Pelt went to Kansas City in 1994 before spending nine seasons with the Buffalo Bills from 1995-03. His tenure is the third longest among Bills’ quarterbacks, trailing only Joe Ferguson (1973-84) and Jim Kelly (1986-96). Van Pelt retired during the spring after his career was cut short due to a wrist injury after last season. He currently serves as an assistant coach for the Buffalo Bills.