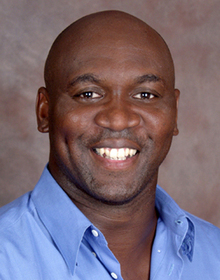 A consensus All-American at Oklahoma State, Thurman Thomas led the Cowboys to a 35-33 victory over West Virginia in the 1987 Sun Bowl. He holds three Sun Bowl records: most rushing attempts (33), most points (24) and most touchdowns (4). A Houston native, Thomas carried the ball a total of 897 times for 4,595 yards, 43 touchdowns and 21 100-yard-rushing games while at OSU. During his rookie year with the Buffalo Bills in 1988, he helped the Bills get to the AFC Championship. In just his second year, he was selected to the Pro Bowl. He was voted the 1991 NFL MVP and selected to the Pro Bowl and All-Madden team. Thomas became the first Bills player to gain over 100 rushing and receiving yards in the same game and went on to rush for over 1,000 yards in eight straight seasons. He set the all-time Bills rushing record with 11,938 yards. He is the second all-time leading receiver in Bills history with 4,341 yards, and he is fourth overall in team scoring. After 12 years with the Bills, including four Super Bowl appearances, six AFC titles, five straight Pro-Bowls and an MVP award, Thomas and other teammates were cut from the Bills for salary cap reasons. He played one more year with the Miami Dolphins before suffering a career-ending knee injury. He signed a one-day contract in 2001 with the Bills so he could retire with the team he spent 12 years with. Thomas finished ninth all-time with 12,074 career rushing yards and sixth in career all-purpose yards. He is the Bills all-time leading rusher with 2,849 attempts for 11,938 yards and 65 touchdowns. He is second in receptions (456) and fourth in receiving yards (4,381).