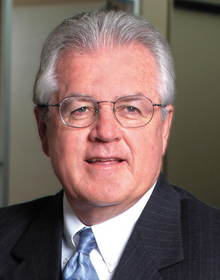 Chairman of the Sun Bowl Football Committee, John H. Folmer became involved with the Sun Bowl Association in 1971. He has served on the football committee for 32 consecutive years and has been chairman of the committee since 1981. He served as the president of the Sun Bowl Association in 2006. The John Folmer Most Valuable Special Teams Player Trophy was established in his honor in 1994. The All-American Football Foundation honored Folmer with the Bud Dudley Bowl Executive Award at the Banquet of Champions in 1999. Folmer has been part of the Sun Bowl Association’s basketball committee, and he was one of the charter members of the Western Refining College All-America Golf Classic committee. An El Paso native and graduate of Ysleta High School, Folmer went on to serve as team captain for the Arizona State University football team. He was a three-year letterman for the Sun Devils (1963-64-65). Folmer was honored in El Paso sportswriter Ray Sanchez’s book, “El Paso’s Greatest Sports Heroes.”