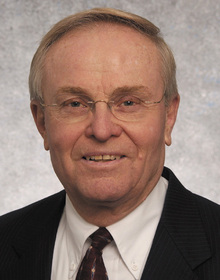 Jimmy Rogers, Jr. had been involved with the Sun Bowl Association for 37 years at the time of his induction. He serves on the Sun Bowl Association Board of Directors and is the organization’s CBS liaison as well as the title sponsor liaison. He is also the chair emeritus of the football committee, for which he has been a member of for over 40 years. Rogers served as president of the Sun Bowl Association in 1970. One of the Sun Bowl trophies awarded after each bowl game is named in honor of Rogers – the Jimmy Rogers, Jr. Most Valuable Lineman Trophy. He has participated in CBS Television negotiations for 32 years and in negotiations for the bowl’s sponsorships with both John Hancock, Wells Fargo and Helen of Troy. Rogers also secured the Sierra Providence sponsorship for the Sun Classic Basketball Tournament. Rogers was honored with the Bud Dudley Bowl Executive Award at the All-American Football Foundation’s Banquet of Champions XVIII in 1999. Rogers has served as UTEP Touchdown Club President (1968) and UTEP Athletic Advisory Committee Chairman (1972). He is chairman of the El Paso Sports Council and was named to the El Paso Sports Hall of Fame in 1989.