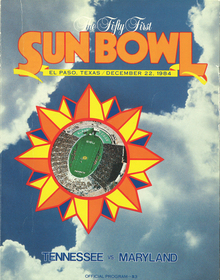 Earlier in 1984, No. 12 Maryland had engineered the greatest comeback in college football history, scoring 42 second half points to defeat defending national champion Miami, 42-40. The Terps showed their tenacity once again, coming back from 21 points down at halftime to win 28-27, which was the second greatest Sun Bowl comeback ever.

Maryland fullback Rick Badanjek was named the game’s Most Valuable Player after rushing for 90 yards and scoring two touchdowns, the final one being a game-winning one-yard touchdown run with 2:28 left in the game.

Maryland opened the second half with a vengeance when running back Tommy Neal raced 57-yards for the end zone. The Terrapins were able to tack on a field goal shortly thereafter.

The subsequent drive also resulted in a Terrapin touchdown with 22 seconds left in the third quarter to take the first lead of the game 22-21.

With the crowd in a frenzy, Tennessee’s Pete Panuska would not give up so easily and returned the kickoff 100 yards to regain control of the lead. Panuska’s touchdown kick return established a Sun Bowl record and he became the fifth player in NCAA history to return a kickoff for 100 yards.

Tennessee’s Carl Zander was the Most Valuable Lineman notching 24 tackles. Maryland’s leading linebacker was Chuck Faucette who finished with 12 tackles.

The game marked the third visit by head coach Johnny Majors after previously bringing Iowa State (1971) and Pittsburgh (1975) to the Sun Bowl.