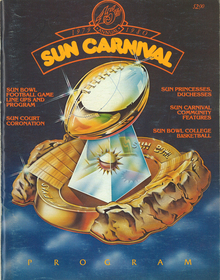 For the second straight year, a pair of the nation’s top teams headed to El Paso. This time the game lived up to its billing, when No. 11 Texas (9-2-0) made its second consecutive trip to face No. 13 Washington (8-3-0) in the Sun Bowl.

The emotional turning point of the game occurred on the opening drive. Washington won the toss and opted to take the very strong wind that was blowing, hoping to get good field position after Texas’ first punt.

Instead, the Longhorns moved the ball down to the one-yard line where, on fourth down, Washington safety Greg Grimes tackled Texas quarterback Donnie Little as he attempted to run the option to the right. Washington proceeded to capitalize on two back-to-back fumbles by Texas and their unstable quarterback position.

Washington nose guard Stafford Mays recovered the first fumble by Texas freshman quarterback Rick McIvor late in the first to set up a Huskies touchdown. Quarterback Tom Flick found the game’s MVP Paul Skansi in the endzone for an 18-yard reception ten seconds into the second quarter. The extra point by Mike Lansford was good and the score was 7-0.

Then, the unthinkable occurred. McIvor fumbles again on the second down of the ensuing drive and Grimes recovered the ball on the Texas 23-yard line. The turnover allowed freshman Willis Ray Mackey to rush for four of the five plays needed to find paydirt. After another successful Lansford kick, Washington extended the lead to 14-0.

The next Washington possession suffered a bit of their opponent’s fate as Flick fumbled on the Texas 44-yard line and Texas tackle Kenneth Sims recovered. An 11-play, 43-yard drive resulted in a touchdown pass from Little to Brad Beck with 3:10 remaining in the half.

Both teams came out of halftime to put on a strong defensive performance and the rest of the game remained scoreless.

Though Texas prevailed in most of statistical margins, gaining more rushing yardage (233-129), total yardage (236-165) and overall amount of offensive plays (75-57), the three first-half fumbles proved to be the decisive factor in the game’s outcome.