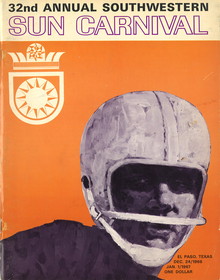 The 1966 game marked the second national Sun Bowl telecast by NBC. No. 15 Wyoming (9-1), which had just won the Western Athletic Conference, held off Florida State 28-20.

The powerful rushing offense of the Cowboys was too much for the Seminoles as Jim Kiick ran for 135 yards on 25 attempts, gained 42 yards on four receptions and added two rushing touchdowns.

Teammate, Jerry Durling was named the Jimmy Rogers, Jr. Most Valuable Lineman for his steady blocking on the line.
Wyoming’s third possession started as a 32-yard punt return by Vic Washington, who led the nation in punt returns. The 31-yard drive resulted in a Kiick one-yard rush, followed by a successful point after kick by Jerry Depoyster.

Florida State’s Kim Hammond aired out a pair of long distance strikes in the second quarter to command the lead. The first was a 49-yard reception to Ron Sellers and, four minutes later, the next was a 59-yard pass to T.K. Wetherell. Kicker Frank Loner nailed both extra point kicks to give Florida State a 14-7 advantage before intermission.

The Cowboys emerged out of halftime with a newfound tenacity and scored 21 unanswered points and, just as importantly, controlled the clock.

Jerry Marion was first to score in the second half on a 39-yard pass from quarterback Rick Egloff. Then, Kiick broke through several tackles on a 43-yard touchdown run. Finally, Egloff added another rushing touchdown. Depoyster made each point after to give the Cowboys a 28-14 lead.

The Florida State duo of Kim Hammond and Ron Sellers connected for another touchdown reception to narrow the lead to eight points, but the Seminoles would not get any further.