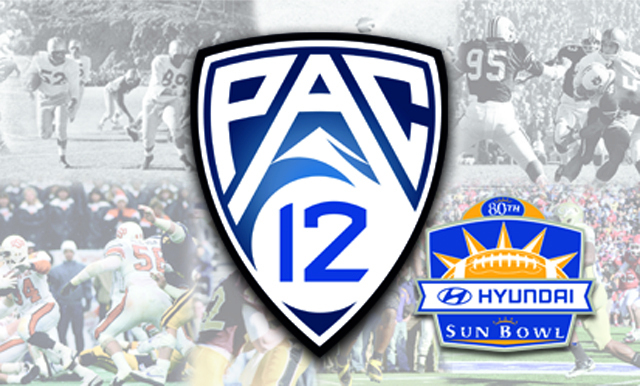 The Sun Bowl Association announced today the extension of its partnership with the Pac-12 Conference with a six-year agreement beginning in 2014.

“The Pac 12 has been an invaluable partner for the Sun Bowl for many years and we are looking forward to our continued partnership with them,” said Walker Crowson, President of the Sun Bowl Association. “The Pac 12 Conference has helped the Sun Bowl deliver quality and exciting match-ups to El Paso in the past and will continue into the future.”

The Hyundai Sun Bowl Football Selection Committee will have the fourth selection from the Pac-12 following the newly-formed College Football Playoff subject to selection guidelines established by the conference. With the new contract, the 2014 game will begin a six-year appearance at Sun Bowl Stadium through 2019.

“The Pac-12 looks forward to continuing our relationship with the Sun Bowl, that outside of the Rose Bowl, has stretched longer than any other bowl game," said Pac-12 Commissioner Larry Scott. “Our teams thoroughly enjoy the hospitality and overall experience provided by the Sun Bowl and El Paso community. Maintaining our partnership with the Sun Bowl provides another quality postseason matchup for the Conference, and adds to an already strong lineup of bowl games for years to come.”

Pac-12 teams have combined for a total of 29 appearances in the Hyundai Sun Bowl for an overall record of 16-12-1, including a 10-7 record over the last 18 years. Seven of the bowl’s all-time highest attended games have featured a Pac-12 team.

The Hyundai Sun Bowl Football Selection Committee is currently under negotiations to bring a quality opponent from a current Bowl Championship Series conference to match up with the Pac-12.

The Sun Bowl has a legacy of providing top quality entertainment and exciting college football games. In 2011, the first overtime contest in game history came as Utah tied up the score with 1:32 left in regulation. The Utes responded to a Georgia Tech field goal with a touchdown for the 30-27 win.

This year’s game will mark the 80th anniversary of the Sun Bowl and is scheduled for Tuesday, Dec. 31 at noon (MST) at Sun Bowl Stadium. CBS Sports will broadcast the game for the 46th consecutive year.