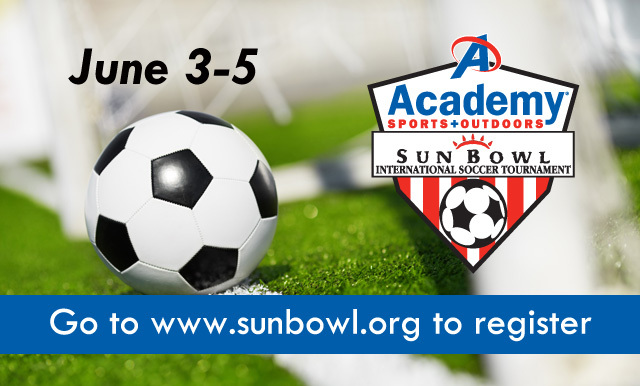 The Academy Sports + Outdoors Sun Bowl International Soccer Tournament plays host to over 150 teams from the Southwest and Mexico, making it one of the largest youth soccer tournaments in the country. Boys’ and girls’ teams consisting of specified age groups participate in the tournament every year.

This summer marks the tournament’s 17th year, as thousands of players take to the pitch to play the world’s most popular sport under the bright West Texas sun. The tournament has grown into the premier youth soccer tournament in the region and will continue to be for years to come.

Teams can sign-up on the Internet at www.sunbowl.org and everyone is encouraged to take advantage of the early bird special fee that must be paid on or before May 12. The information on rules, roster information and a map for the Westside Sports Complex is also available at www.sunbowl.org. The tournament is sanctioned by STYSA (South Texas Youth Soccer Association).