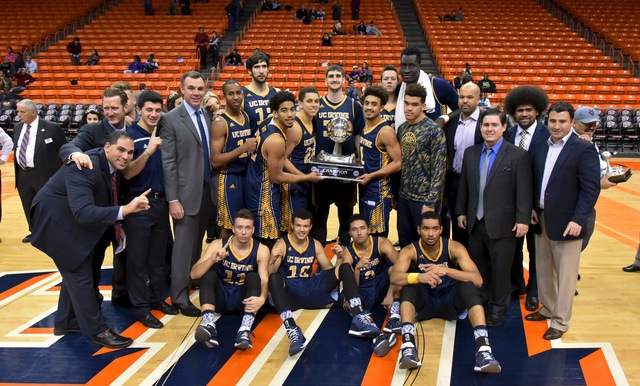 UC Irvine senior forward Mike Best and junior guard Jaron Martin added 10 each as the Anteaters improved to 10-4, the program’s best start since a similar record to open the 2002-03 season.

Ndiaye, who also had nine rebounds and five blocked shots in the championship game, was named to the all-tournament team.

UCI senior guard Alex Young had six assists and moved within one of tying Raimonds Miglinieks for the program record (475).

The Anteaters, who outrebounded the Spartans, 47-33, shot 53 percent in the first half and 47 percent for the game. Norfolk State shot 28 percent from the field as UCI improved to 8-0 this season when limiting the opposition to less than 40 percent.

Consolation Game Recap
UTEP improves to 7-5 on the season and breaks a five-game losing streak after bouncing back and defeating Sam Houston State 87-68 on Tuesday night in the Don Haskins Center.

UTEP forward Lee Moored posted a game-high 17 points as the Miners used an early 23-0 run and never looked back. SHSU actually held a 4-0 lead to start the game but the Miners caught fire and played well on both ends of the court taking a 23-4 lead. The Bearkats, who fall to 5-7 this season, kept fighting and got to within six at 32-26 but UTEP was too powerful and extended its lead to 45-30 heading into the locker room at the half.

The closest Sam Houston State could get in the second half was nine points, as UTEP’s lead reached as many as 24 points.

The Miners played well defensively holding SHSU to only 40 percent shooting from the floor and outrebounded the Bearkats 42-36. Dominic Artis, who earned the Don Haskins Award, tallied a double-double with 13 points and 12 rebounds.

“It was defensive stops, it was open floor play, it was next easy pass,” head coach Tim Floyd said. “I thought that we kept them out of the lane. They had to settle for jump shots. We were very good in the open floor in terms of our decision making, probably the best we have been this year.”