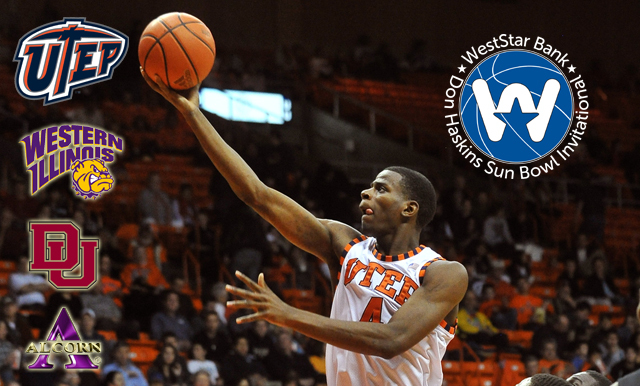 The Sun Bowl Association and WestStar Bank are pleased to announce the field for the 2013 WestStar Bank Don Haskins Sun Bowl Invitational. Western Illinois, Denver and Alcorn State will join UTEP for the 52nd edition of the invitational scheduled for Dec. 28-29, 2013 at the Don Haskins Center.

“We’re looking forward to another exciting tournament this year,” said Larry Patton, President and CEO of WestStar Bank. “As title sponsor, we are extremely proud to work with the Sun Bowl Association and to be a part of the success and positive impact the tournament has had over the years.”

Western Illinois and Denver are coming off 22-win seasons that led them to regular season conference championships. In addition, Denver advanced to the second round of the National Invitation Tournament while Western Illinois participated in the College Basketball Invitational.

“The Sun Bowl Invitational has been a vital part of the holiday fabric here for many years,” said UTEP Head Coach Tim Floyd. “We’re looking forward to welcoming some new opponents this year including two 20-game winners a year ago.”

Denver comes to the Sun City following back-to-back 22-win seasons, 22-10 in 2013, and capturing a share of the Western Athletic Conference regular season championship. The Pioneers return three starters from the 2012-13 season including senior Chris Udofia who helped Denver end the past campaign ranked 63rd in the RPI.

An All-WAC First Team and All-WAC Defensive Team selection, Udofia was the Pioneers’ scoring leader (13.3) and was tabbed to the National Association of Basketball Coaches All-District 6 First Team. Also returning for Denver is All-WAC Third Team honoree Brett Olson. The junior guard ranked second in the WAC in three-pointers made (2.38) and third in three-point field goal percentage (.434).

Coach Scott is the first coach to bring three different teams to the Sun Bowl Invitational. The Princeton alum’s last appearance was with his alma mater in 2004. Prior to that, Scott brought his Air Force Falcons to the invitational in 2002.

Western Illinois enjoyed their most successful season in program history after winning the program’s first ever regular season championship of The Summit League and earning 22 wins, the most ever in their Division I history. The Fighting Leathernecks led the nation in least personal fouls committed (12.6) and ranked second in scoring defense (52.7).

The Fighting Leathernecks return three players that saw action in every game of the 2012-13 season. Senior Adam Link is coming off selections to The Summit League All-Newcomer Team and All-Summit League Third Team.

Molinari was tabbed the 2013 ‘Coach of the Year’ by The Summit League, CollegeInsider.com and College Sports Madness.

A young Alcorn State team will head to El Paso with an impressive class of freshmen that include an ESPN top-100 center, one of the top Memphis forwards and two state champions in Mississippi. Sophomore LeAntwon Luckett, the Braves’ second leading scorer (13.4) in 2012-13, returns to the starting line-up. Joining Luckett, is Mississippi State transfer Shaunessy Smith, one of the top shooting guards in the state of Mississippi from Noxubee County High School.

UTEP, 76-22 all-time in the tournament claiming 29 titles, will host this year’s classic for the 52nd year.

The Miners return six players who appeared in at least 24 games during the 2012-13 season including junior Julian Washburn. Tabbed third team All-Conference USA as well as to the league’s All-Defensive Team, Washburn was also the scoring leader for the Miners (12.3).

“We are very excited about this year’s field for the WestStar Bank Don Haskins Sun Bowl Invitational,” said Barry Kobren, Sun Bowl Association chairman for the event. “One of our main goals each year is to bring in teams that will help UTEP’s strength of schedule and RPI. We think we’ve done that by bringing in two opponents who each won 22 games and were conference champions with high RPI’s of their own.

“We are also excited that Alcorn State and Coach Luther Riley will be joining coaches Joe Scott (Denver) and Jim Molinari (Western Illinois). Coach Riley is building a great program at Alcorn that will feature an exceptional recruiting class in 2013. They should be a much improved team."

Denver returns to the nation’s oldest holiday invitational after a 40-year hiatus. The last time the Pioneers played in the Sun Bowl they defeated Baylor (70-51) and advanced to the championship game to face UTEP in 1963. The Miners claimed the tournament title with a 53-42 win over Denver. Western Illinois and Alcorn State are making their first appearance in the event.

UTEP Student Seating
-Student seating will be reserved seating, not GA
-Purchased with student ID at UTEP only
-May purchase two tickets at military/student price, available in all sections

Active Military Pricing
-Military pricing will be offered at the same price as the student pricing
-Purchased with military ID
-May purchase four tickets at student/military price, available in all sections

*Must purchase at the UTEP Ticket Center Only