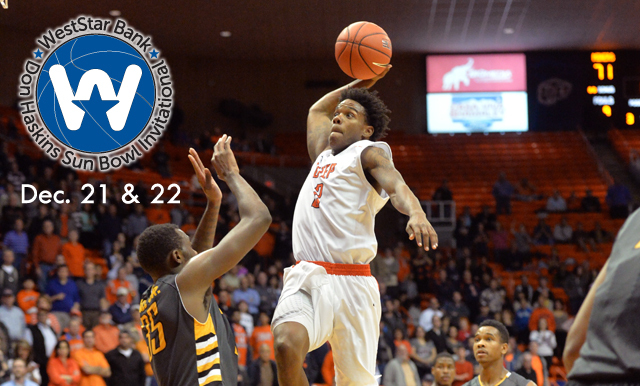 The Sun Bowl Association and WestStar Bank are pleased to announce the field for the 2015 WestStar Bank Don Haskins Sun Bowl Invitational. UC Irvine, Sam Houston State and Norfolk State will join UTEP on Dec. 21-22, 2015 at the Don Haskins Center.

“This year’s tournament will feature the deepest field we have had since 1999,” said tournament director Barry Kobren. “Any one of the teams could win it. All four teams won over 20 games last year and went on to postseason play. They all finished second in their respective conferences and finished the season with high RPI rankings. We are looking forward to four really great basketball games.”

Sam Houston State and UC Irvine will open the 54th edition of the invitational with a 5 p.m. tip-off on Monday, Dec. 21, to be followed by UTEP vs. Norfolk State at 7 p.m. The consolation game is scheduled for Tuesday, Dec. 22, at 5 p.m. prior to the championship game at 7 p.m.

“The Sun Bowl tournament always provides us a field that helps us prepare for the challenges of conference play,” said UTEP Head Coach Tim Floyd. “This year is no exception. The three teams that will be joining us all won at least 20 games last year, and they all went on to postseason play.

“UC Irvine has one of the most impactful returning players in the country in Mamadou Ndiaye. He is 7’6” and has helped elevate their program to a level they have not been to since the early 80s.”

All four teams head into the 2015-16 campaign following 20 or more wins and postseason appearances during the last season. In addition to last year’s success, all four featured schools boast an average of at least 20 wins over the past three years.

UC Irvine is coming off a 21-13 season that included a Big West Conference Tournament Championship leading the Anteaters to the second round of the 2015 NCAA Tournament. The conference tournament title and the NCAA Tournament bid were the first in program history.

Entering his sixth season at the helm of the UCI program, head coach Russell Turner has led the Anteaters to 65 wins over the past three seasons to include postseason appearances all three years. With a second-place Big West Conference finish following its 2015 late-season success, UC Irvine is favored to win the Big West Conference title in 2016.

Also entering his sixth year at the reins of his program, Jason Hooten brings the Sam Houston State Bearkats back to the Sun City following a 26-9 season. With 50 wins over the last two season, the Bearkats finished second in the Southland Conference with a 15-3 record. Sam Houston State made back-to-back CollegeInsider.com Tournament appearances

Although Sam Houston State returns just one starter from the 2014-15 season, the Bearkats are loaded with experienced players with five returning seniors and six transfers.

Norfolk State will head to El Paso following a 20-14 season under the direction of third-year head coach Robert Jones. Their 2015 CollegeInsider.com Tournament appearance marked the fourth consecutive postseason appearance for the Spartans and the second under Jones’ tutelage. With Mid-Eastern Athletic Conference runner-up honors in 2014-15, the Spartans achieved their third 20-win in the last four years including six wins over eventual postseason teams. Norfolk State’s 12 conference wins last season marked the third-most wins in 17 seasons in the MEAC.

UTEP, 80-22 all-time in the tournament claiming 31 titles, will host this year’s classic for the 54th year.

UC Irvine will be making their first appearance in the event, while Sam Houston and Norfolk State will both be returning for their second trip to the nation’s oldest holiday tournament.