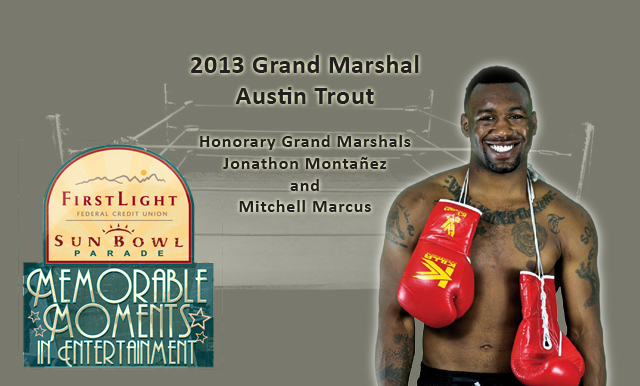 In addition to honoring Trout, parade officials have selected Mitchell Marcus and Jonathon Montañez as honorary grand marshals for this year’s parade. Marcus and Montañez, former students at Coronado High School and Franklin High School, respectively, have been recognized for their commendable sportsmanship moment during a rivalry basketball game earlier this year.

“Jonathon Montañez and Mitchell Marcus exemplify the spirit of our community,” said Sun Bowl Association Executive Director Bernie Olivas. “Their story being shared nationwide brought to light what a tight-knit community we are. Jonathan’s unselfish act and Mitchell’s relentless attitude is something we want to continue celebrating.”

Trout became a boxing success after winning his first professional fight at the age of 20. The southpaw became the WBA Light Middleweight Champion in 2011, defeating the defending champion Rigoberto Alvarez.

The Las Cruces native announced last week that he will be facing current WBA interim champion Erislandy Lara (18-1-2, 12 KO’s) on Saturday, Dec. 7, 2013 at the Barclays Center in Brooklyn, New York.

Trout, now 28 years old, was able to maintain an undefeated record until April of 2013, dropping a decision to Saul “Canelo” Alvarez, making his record 26-1 with 14 knockouts. The junior middleweight boxer was inducted into the New Mexico Boxing Hall of Fame this past summer.

“I am very excited to be a part of the FirstLight Federal Credit Union Sun Bowl Parade, which has been a regional tradition since 1936,” said Trout. “I continue to honor the tradition of the biggest event in the Southwest by serving the parade with pride.”

Outside of the ring, Trout devotes his time speaking to elementary school children against bullying; he is also a supporter of the St. Baldrick’s Foundation geared towards childhood cancer research. Most recently, he has spent time making appearances for the Muscular Dystrophy Association and collecting school supplies for underprivileged children in the State of New Mexico.