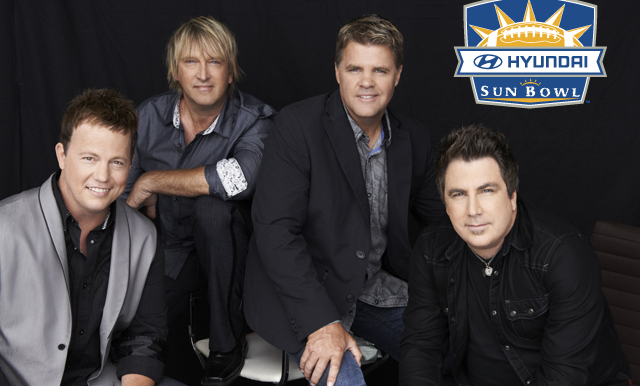 The Sun Bowl Association and Hyundai Motor of El Paso are proud to announce award-winning country band Lonestar as the performers for the 81st Hyundai Sun Bowl halftime show on Saturday, Dec. 27, 2014.

“Lonestar is celebrating 20 years of making great country music and we couldn’t be more excited to have them perform at this year’s Hyundai Sun Bowl halftime,” said Oscar Leeser of Hyundai of El Paso. “This award-winning group has dozens of country hits under their belt and we are sure the football fans will enjoy their performance at Sun Bowl Stadium.”

Known for merging their country roots with strong melodies and rich vocals, Lonestar has amassed RIAA-certified sales in excess of ten million album units since their national launch in 1995. They achieved 10 No. 1 country hits including “No News,” “Come Crying To Me,” and their crossover smash “Amazed” (which was also #1 on the Billboard Hot 100, the first record since 1983’s “Islands in the Stream” to top both charts). The band’s awards include a 1999 ACM Single of The Year for “Amazed” (the song also won the Song of the Year award) and the 2001 CMA Vocal Group of the Year.

The Hyundai Sun Bowl game is scheduled for Saturday, Dec. 27 at noon at Sun Bowl Stadium. The game will be broadcast live nationally in high definition on CBS for the 47th consecutive year. Tickets for the Hyundai Sun Bowl range in price from $22 to $62 and can be purchased by calling (915) 533-4416 or (800) 915-BOWL or go on-line at www.ticketmaster.com.