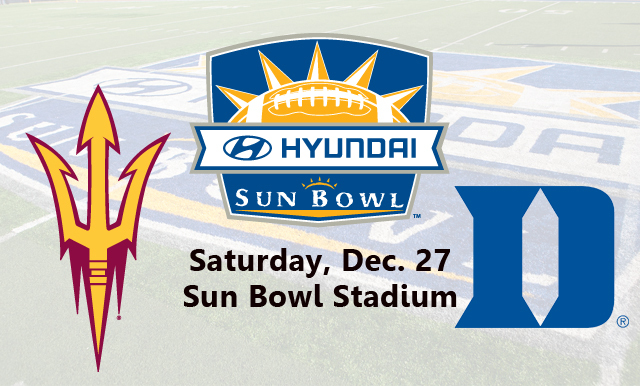 “When we started off today, I thought there was no way in the world that we would get two 9-3 teams,” said John Folmer, Chairman of the Hyundai Sun Bowl Football Committee. “Now we have two 9-3 teams, Duke and Arizona State. This is a blessing and it’s a good thing for El Paso.

“Arizona State has been here before and everybody knows the name Duke, not only because of their basketball tradition but because they’ve been playing good football the last few years. We are all very excited and we think it’s going to be a great game and a great day for El Paso.”

The 2014 Hyundai Sun Bowl will mark the first meeting between the two teams.

“We are really excited to have Arizona State and Duke this year in the 81st Sun Bowl,” said Barry Kobren, President of the Sun Bowl Association. “We have two 9-3 teams; two very successful programs over the last two years. Arizona State is ranked 15th. Duke played in a great bowl game last year and had a great performance against Texas A&M. We expect it to be another high-scoring shootout like that game was last year. Both teams can score a lot of points so it should be a great game.”

“This is a great opportunity for us to compete against a top-notch program and close out the 2014 season on a high note,” Arizona State Head Coach Todd Graham said. “We look forward to representing our university in El Paso with character, class and dignity.”

The 2014 Hyundai Sun Bowl will be the 28th bowl appearance for the Arizona State program and the third under third-year head coach Graham.

Led by the 2013 Pac-12 Coach of the Year, 15 All-Pac-12 honorees and a school-record 12 Pac-12 All-Academic recipients, the Sun Devils are looking to secure back-to-back 10-win seasons for the first time since Frank Kush notched double-digit victories from 1970-73.

Record-breaking quarterback and Pac-12 Scholar-Athlete of the Year Taylor Kelly, 1,000-yard rusher D.J. Foster and 1,000-yard receiver Jaelen Strong pace an offense that ranks 18th in the nation in scoring offense and averages more than 440 yards per game. ASU’s defense ranks in the top eight in the nation in sacks and tackles for loss, and has forced 25 turnovers and scored five touchdowns this season.

“Our university and community have a number of ties to this great state,” Vice President for University Athletics Ray Anderson said.

“Nearly 11,000 Arizona State alums live in Texas, and more than 1,200 undergraduate and graduate students from Texas currently attend ASU. We had nearly 25,000 Sun Devils travel to Dallas in 2013 to watch us take on Notre Dame and we can’t wait to see Sun Devil Nation out in full force in El Paso.”

“To be selected to participate in the Sun Bowl is both a privilege and honor for our program,” Duke Head Coach David Cutcliffe said. “The tradition of the Sun Bowl is well documented, and it is exciting to become a part of that prestigious history.

“Obviously, I could not be any more thrilled for our seniors, who together become the first class in Duke history to play in three bowl games. That means a lot, and it should. This group has earned this. Winning 25 games in three seasons and 19 games over the past two seasons hasn’t been easy.

Offensively, the Blue Devils are led by first team All-ACC selections in wide receiver Jamison Crowder and guard Laken Tomlinson. Crowder, who also received first team all-league honors as a return specialist, has 78 pass receptions for 952 yards and six touchdowns while sitting just seven catches shy of the ACC’s all-time record of 283 held by former Blue Devil receiver Conner Vernon. A two-time first team all-conference choice, Tomlinson was the runner-up in the balloting for the ACC’s Jacobs Blocking Trophy, an honor presented annually to the league’s top blocker as voted on by the coaches.

On defense, three All-ACC picks – safety Jeremy Cash, safety DeVon Edwards and linebacker David Helton – highlight a unit that ranks among the nation’s top 20 in third down defense (18th), pass efficiency defense (20th) and scoring defense (20th). A two-time all-league pick and semifinalist for the 2014 Thorpe Award, Cash is the only defensive back in the nation with 100-plus tackles, 10-plus tackles for loss and five-plus sacks this season. Edwards, a third team all-league pick as a return specialist and honorable mention choice in the defensive backfield, has 119 tackles, 6.5 tackles for loss and a team-high nine pass breakups to his credit this season. A first team All-ACC pick who leads the conference in tackles with 125, Helton earned first team Capital One Academic All-America selection last week.

“Having been fortunate enough to participate in the Sun Bowl, I know both programs will have a great experience,” added Cutcliffe. “What the El Paso community does in terms of embracing the teams and fans, along with its involvement with the game, is second to none. We look forward to representing the Atlantic Coast Conference and playing against another very deserving team in Arizona State. I have a tremendous amount of respect for Coach Graham and what their staff has been able to accomplish in such a short amount of time.”

The Blue Devils’ Hyundai Sun Bowl appearance is the 11th bowl appearance and third consecutive under Cutcliffe. Cutcliffe was an assistant at Tennessee at the 1984 Sun Bowl.

The 81st Hyundai Sun Bowl is scheduled for Saturday, Dec. 27 at noon (MST). CBS Sports will broadcast the game for the 47th consecutive year, which is the longest running partnership between a network and a bowl game. Ticket prices for the game are $22, $32, $47, $57 and $62. Tickets can be purchased at the Sun Bowl Association office (915-533-4416, 800-915-BOWL or email), online at www.ticketmaster.com or at any TicketMaster outlet.