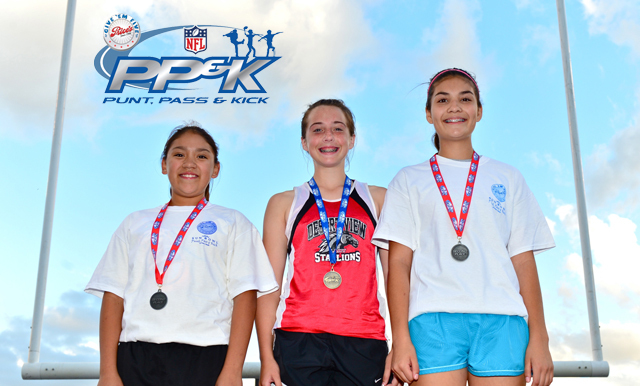 Five El Paso champions from the Price’s Creameries Give ‘Em Five NFL Punt, Pass and Kick will travel to Arlington, Texas, to represent the Sun City at the Dallas Cowboys game this Sunday.

“We are very proud of our local contestants coming out on top of the west Texas region,” said Bernie Olivas, Executive Director of the Sun Bowl Association. “This is a wonderful opportunity to showcase some of the homegrown talent we have in El Paso at a statewide level. We are lucky to partner up with Price’s Creameries and the El Paso Parks and Recreation Department to give this opportunity to these young El Pasoans.”

The 12-13 age division will be represented by repeat champions Beth Baumler and Jasper Sanchez. Baumler, an eighth grader at Desert View Middle School, won the west Texas region as a nine-year old and represented El Paso at a game in 2011. Sanchez, an eighth-grade student at Bill Sybert Middle School, will be making his third appearance at a Cowboys’ game. He finished second in 2012 and third as a 10-year old in 2010.

Edward Duran, a freshman starting defensive tackle at Franklin High School, will make the trip immediately following his final football game of the season on Saturday. Duran, along with the rest of the El Paso representatives will compete that evening at AT&T Stadium. All state competitors will be recognized during a pregame ceremony at the Cowboys game.

The annual competition is hosted by the Sun Bowl Association in conjunction with the El Paso Parks and Recreation Department and is open to all boys and girls ages 6-15.