Mike Price to be Honored as Sun Bowl Legend October 18, 2014 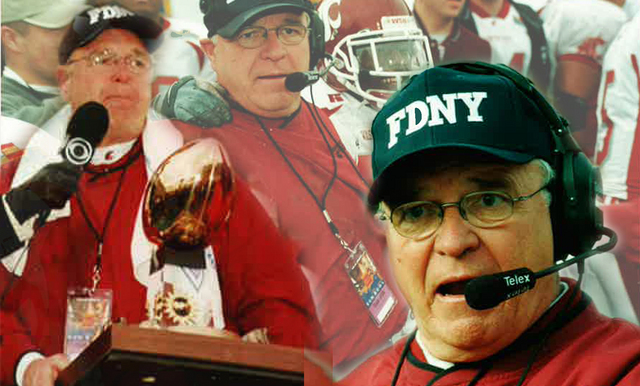 Mike Price, the 1997 National Coach of the Year and 2001 Hyundai Sun Bowl game participant, has been selected as the 2014 Legend of the Sun Bowl.

“Mike Price is a true legend in the coaching fraternity and it is only fitting that he be inducted as a Legend of the Sun Bowl,” said Barry Kobren, Sun Bowl Association President. “Upon retirement, only five active coaches had more wins than Coach Price. Before he became an institution coaching the Miners, he left his mark on the Sun Bowl leading his Washington State Cougars to victory in the 68th edition of our game. We are truly honored to add Mike Price’s name to the Legends of the Sun Bowl.”

Price will be inducted at the 2014 Rotary Sun Bowl Team Luncheon on Dec. 26 at the Judson F. Williams Convention Center.

“I’m really surprised and humbled by this wonderful honor,” said Price. “The Sun Bowl is one of the reasons why El Paso is such a special place and I love it so much.

“The Sun Bowl game was a great start for the 2002 Washington State campaign. Ending the 2001 season on a high note carried over to the next year when we had a Heisman Trophy candidate in our quarterback, we climbed the national rankings and culminated the year at the Rose Bowl. It was a feel-good thing for myself and our team back then. It is a humbling award for me now.”

Selected as the 2001 Pac-10 Coach of the Year after finishing second in conference standings, Price led the Washington State Cougars to a 33-27 win over Purdue at the Sun Bowl game. After giving up a touchdown and allowing an onside kick that pulled the Boilermakers within six points, the Washington State defense forced Purdue to turn the ball over on downs with 1:17 left to play in the game. The win catapulted the Cougars to a No. 10 ranking in the AP and Coaches’ polls finishing 10-2 for the season. Price and his Cougars finished the 2002 season with a bid to the Rose Bowl as Pac-10 Co-Champions and a 10-3 record.