Win a Trip to the College Football National Championship September 16, 2014 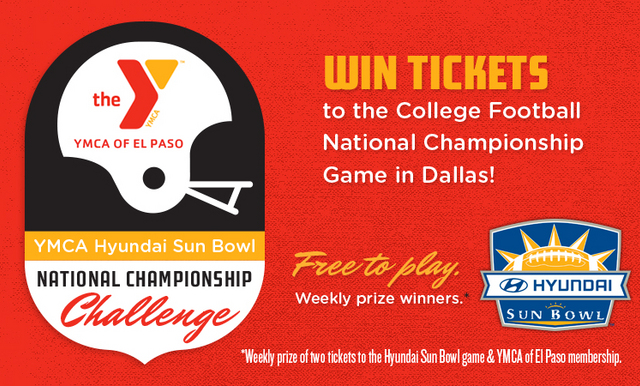 “We are entering a new era in college football with the new playoff system, an era every college football fan has been waiting for and we wanted to find a way to reward fans for their continued support of college football,” said Bernie Olivas, Executive Director of the Sun Bowl Association. “Fans will not only have weekly chances to win tickets to the Hyundai Sun Bowl, but every contestant will also have an opportunity to win tickets for the national championship game.”

Beginning with college football games set to kick off on Thursday, Sept. 25, contestants can predict the winners of 10 predetermined Atlantic Coast Conference (ACC) and PAC-12 games, the Hyundai Sun Bowl conference affiliates. With each game valued at one point, a weekly winner will be determined by the individual who accumulates the most points. In addition, contestants will be asked to estimate the total points scored by both teams of a predetermined game. In case of a tiebreaker, the contestant with the most accurate prediction of total points scored in that predetermined game will be the weekly winner.

The 10 weekly winners will win two 2014 Hyundai Sun Bowl tickets, one month free adult membership to the YMCA of El Paso, and will automatically advance to “Championship Week” in which they will predict the winners of each college football conference championship game. The contestant with the most points will win airfare, hotel and tickets for two to the National Championship Game on Monday, Jan. 12, 2015, at AT&T Stadium in Arlington, Texas along with a one-year family membership to the YMCA of El Paso.