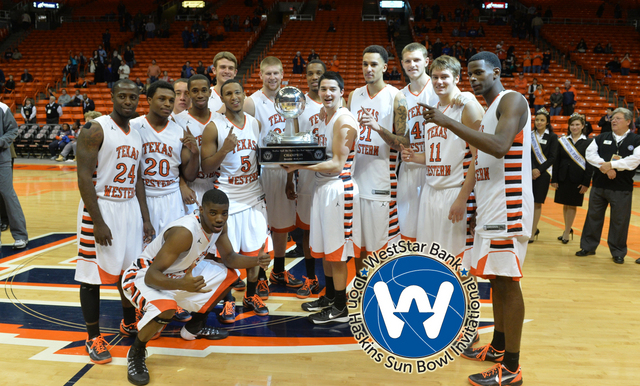 The Sun Bowl Association and WestStar Bank are pleased to announce the field for the 2014 WestStar Bank Don Haskins Sun Bowl Invitational. North Dakota State, Kent State and Alcorn State will join UTEP on Dec. 21-22, 2014 at the Don Haskins Center.

“We are truly honored to be a part of this special event and our relationship with the Sun Bowl Association is something we value tremendously,” says Larry L. Patton, CEO and President of WestStar Bank. “El Paso has been home to this iconic holiday basketball tournament since 1961, and we’re pleased to be a part of the tournament’s history and in continuing a tradition that marks our commitment and involvement in the community.”

North Dakota State and Kent State will open the 53rd edition of the invitational with a 5 p.m. tip-off on Sunday, Dec. 21, to be followed by UTEP vs. Alcorn State at 7 p.m. The consolation game is scheduled for Monday, Dec. 22, at 5 p.m. prior to the championship game at 7 p.m.

“We are excited to be participating in the WestStar Bank Don Haskins Sun Bowl Invitational for the 53rd year and look forward to creating more holiday basketball memories for the people of El Paso,” said UTEP Head Coach Tim Floyd.

North Dakota State was one of the Cinderella stories of the 2014 NCAA basketball tournament with their last second bracket-busting win over Oklahoma. NDSU, coming off a 26-7 campaign, will be one of the highest ranked teams to participate in the Sun Bowl Invitational finishing the regular season ranked 35th in the final RPI standings.

The Bison had one of its best seasons in program history after sweeping The Summit League regular season and tournament titles to earn an automatic bid to the NCAA tournament. The Bison finished the year ranked first in the nation in team field goal percentage (50.5) as the only Division I team over 50 percent. North Dakota State’s free throw percentage (75.1) ranked 16th in the country. With the nation’s 37th-toughest schedule, the Bison finished the 2013-14 season with the 20th-best winning percentage (.788) and was one of just 22 teams with over 10 road wins.

NDSU will be led by first year head coach Dave Richman, the associate head coach for the past seven years has spent a total of 11 seasons in Fargo. North Dakota State set single season program records for field goal percentage and blocks (145). With 50 victories over the last two seasons, the Bison had the most successful two-year stretch in program history.

Kent State returns to the WestStar Bank Don Haskins Sun Bowl Invitational having won the 1999 edition of the event with a 90-80 victory over UTEP in the championship game. That began a string of unprecedented success for the Mid-American Conference power that included 10 consecutive 20-win seasons, five NCAA tournament appearances and an Elite Eight run in 2002. KSU, always atop conference standings, produced five MAC titles during this span and has competed in postseason play 14 of the last 16 seasons (5 NCAA, 6 NIT and 3 CIT).

Coach Senderoff has added transfer guard Deon Edwin. A First Team All-Region IX selection, Edwin scored a Laramie County single-season record 675 points in his lone year at the school. He averaged 21.8 points per game, which ranked 10th in the country, while also leading the Golden Eagles in rebounding at 7.4 rebounds per game and handing out 3.0 assists per game.

Alcorn State, under the direction of head coach Luther Riley, will make its second consecutive appearance in the Sun Bowl Invitational. The Braves are led by first team All-SWAC and 2013 WestStar Bank Don Haskins Sun Bowl Invitational All-Tournament Team selection LeAntwan Luckett. Luckett paced the Braves in scoring averaging 16.0 points per game shooting just over 42 percent from the field. Luckett scored over 20 points in nine games and scored in double figures 26 times in 31 games. Senior forward Octavius Brown was second on the team in scoring averaging 13.5 points per game while leading the Braves in rebounding with 6.5 rebounds per game.

Sophomore forward Marquis Vance averaged 10.0 points and 5.1 rebounds per game. He scored in double figures in 15 of the 31 games the Braves played during the 2013-14 season.

UTEP, 78-22 all-time in the tournament claiming 30 titles, will host this year’s classic for the 53rd year.

The Miners head into the 2014 season following what may have represented one of Coach Floyd’s finest coaching performance as he was named the NABC UPS District 11 Coach of the Year. With lone point guard C.J. Cooper on the roster forced to play 38 or 40 minutes, the Miners came within one win of tying for the Conference USA regular season championship.

“We are also excited that Alcorn State and Coach Luther Riley will be returning to El Paso to join coaches Dave Richman (NDSU) and Rob Senderhoff (KSU),” Kobren added. “Coach Riley has some great players returning and has added a great recruiting class at Alcorn State."
North Dakota State will be making their first appearance in the event, while Kent State and Alcorn State will both be returning for their second trip to the nation’s oldest holiday tournament.