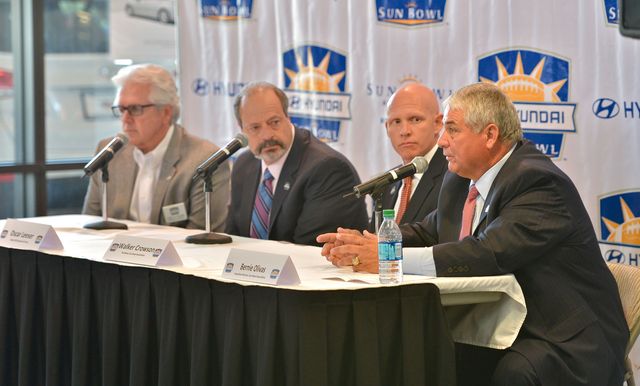 The Sun Bowl Association and Hyundai Motor America announced the extension of their partnership for six more years making the title sponsorship the longest running agreement for the nation’s second oldest bowl game.

“We are grateful to the good people at Hyundai Motor America and, certainly, Oscar Leeser for continuing their support of the Sun Bowl and El Paso,” said Walker Crowson, Sun Bowl Association President. “Our new sponsorship agreement with Hyundai allows the Sun Bowl to continue to host El Paso’s biggest event and position our game for future growth and success.

The six-year agreement runs in conjunction with contract renewals with the Pac-12 Conference and Atlantic Coast Conference (ACC) set through 2019.

“I have always wanted to make a difference in my community, and I believe through my sponsorship of the Sun Bowl game, we are doing just that,” said Mayor Oscar Leeser, owner of Hyundai of El Paso. “The Hyundai Sun Bowl produces the largest economic impact of any annual event in El Paso, and I am proud to be able to help ensure that the Hyundai Sun Bowl continues to have a significant impact on the El Paso economy.

The 81st Hyundai Sun Bowl is scheduled for Saturday, Dec. 27 at noon (MST) at Sun Bowl Stadium in El Paso. CBS Sports will broadcast the game for the 47th consecutive year. The 2014 edition of one of El Paso’s longest-standing traditions will once again pit teams from the Pac-12 and ACC in a new selection format.

The Hyundai Sun Bowl Football Selection Committee will share the third through sixth selections from the ACC with the Belk Bowl, the New Era Pinstripe Bowl and either the Taxslayer.com Gator Bowl or the Franklin American Mortgage Music City Bowl. The Discover Orange Bowl will continue to have the conference champion or the first selection followed by the Russell Athletic Bowl.

On the Pac-12 side, the Hyundai Sun Bowl will have the fourth selection following the newly-formed College Football Playoff.

“The success of events like the Hyundai Sun Bowl in El Paso is attributed to the monumental support of sponsors like Hyundai Motor America and Mayor Oscar Leeser,” said Bernie Olivas, Executive Director of the Sun Bowl Association. “We are delighted to continue our relationship with a sponsor that understands the positive impact the game brings to our community.

“The contract extensions with the conferences and Hyundai ensure more years of exciting football matchups in El Paso and we couldn’t be more thrilled to continue this tradition.”

About Hyundai Motor America
Hyundai, which was founded as Hyundai Auto Service in Korea in 1946, has established an American presence and over half the cars Hyundai sells in the U.S. are made in the U.S. Hyundai has a technologically sophisticated manufacturing facility in Montgomery, Ala., engineering facilities in Michigan, plus design, research and testing grounds in California. All of which provides around 5,000 jobs for American automotive workers. With more than 20,000 employees at dealerships and 6,000 workers employed by various vendors, Hyundai has created a micro-economy.

About the Sun Bowl Association
The Sun Bowl is one of the oldest college football bowl games in the nation. First played in 1935, the Hyundai Sun Bowl now matches teams from the ACC and Pac-12 conferences. Through the years, the Sun Bowl has featured many college football stars that went on to outstanding pro football careers. The list includes names such as Tony Dorsett, Barry Sanders, Don Maynard, Derrick Thomas, Thurman Thomas, Carson Palmer, LaDainian Tomlinson and Priest Holmes

One of the highlight matchups in the game’s 80-year history came in the inaugural year of Hyundai’s sponsorship. The renewal of the Notre Dame and Miami rivalry for the 2010 Sun Bowl game resulted in a sellout in less than 24 hours and the largest crowd to ever assemble at Sun Bowl Stadium.