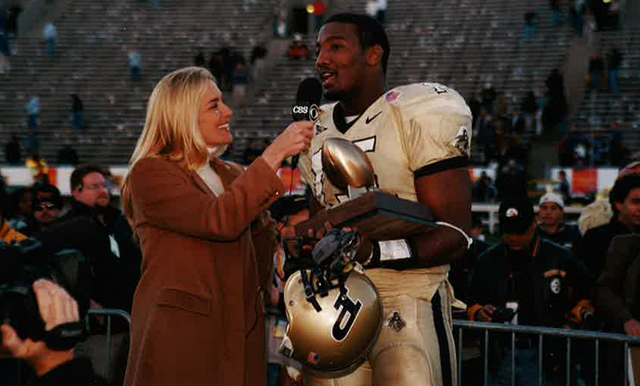 While we enjoy Super Bowl XLVIII on Sunday afternoon, the Hyundai Sun Bowl family and fans can do it with a little sense of pride knowing that 16 players and coaches on that field are part of our Sun Bowl history!

Here are the details:

Ten players and coaches from the Seattle Seahawks are Sun Bowl alumni, six Denver Broncos have joined us in El Paso.

The Seahawks
Seattle defensive end Cliff Avril (Purdue) and tight end Zach Miller (ASU) met on the gridiron in the 2004 Sun Bowl as the Sun Devils edged Purdue 27-23. Cornerback Walter Thurmond and center Max Unger were part of the 2007 Oregon team that defeated USF, 56-21. Cornerback Richard Sherman and wide receiver Doug Baldwin were part of the Stanford entourage in 2009 that fell to Oklahoma, 31-27.

The Seahawks’ Assistant Head Coach and Offensive Line coach Tom Cable was the offensive coordinator for UCLA in 2005, while special teams coordinator Brian Schneider served as the linebackers and safeties coach for the Bruins that same year. Defensive backs and cornerbacks coach Kris Richard was a cornerback for USC in 1998. Defensive Passing Game Coordinator Rocky Seto was also in El Paso in 1998 as a cornerback for the Trojans.

The Broncos
Broncos’ safety Quinton Carter was a member of the 2009 Oklahoma squad that defeated teammate Sione Fua’s Stanford Cardinal. Cornerback Marquice Cole visited the Sun City with Northwestern in 2005, falling to UCLA 50-38. Offensive tackle Orlando Franklin was with Miami in the Hurricane’s 2010 loss to Notre Dame, 33-17.

Defensive end Shaun Phillips was a two-time participant at the Sun Bowl with Purdue in 2001 and 2002, earning the Jimmy Rogers, Jr. Most Valuable Lineman trophy in 2002 recording three solo tackles, one pass deflection and one sack.

Offensive assistant Brian Callahan is the only member of the Broncos’ coaching staff that has been a part of a Sun Bowl team as a backup quarterback for UCLA in 2005.