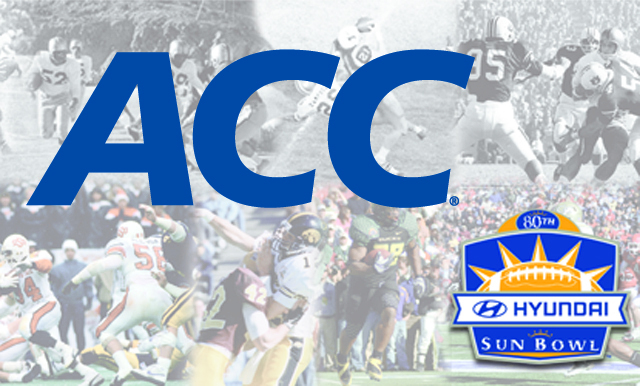 The Sun Bowl Association announced today a six-year extension with the Atlantic Coast Conference set to begin in 2014.

“We are thrilled to continue our partnership with the ACC,” said Walker Crowson, Sun Bowl Association President. “We have been part of the ACC family for the past three seasons which has allowed us to bring high-profile, competitive teams to the Sun Bowl and we look forward to building upon that tradition.

“We have only begun to scratch the surface of the quality and depth that the ACC has to provide which is exciting for us. When you combine the strength of the current ACC teams and the addition of its new schools this year and next, the possibilities for compelling Sun Bowl games are endless.”

The Hyundai Sun Bowl will share the third through sixth selections from the ACC with the Belk Bowl, the New Era Pinstripe Bowl and the Taxslayer.com Gator Bowl or the Franklin American Mortgage Music City Bowl. The Discover Orange Bowl will continue to have the conference champion or the first selection followed by the Russell Athletic Bowl.

“The Hyundai Sun Bowl has one of the most storied bowl histories and we are pleased to continue our partnership for the next six years,” said ACC Commissioner John Swofford. “The Sun Bowl Association does a first-class job in its hospitality, community involvement and creating an experience that will long resonate with our participating teams.”

The ACC representative will face an opponent from the Pac-12 Conference in which the Hyundai Sun Bowl selects after the newly-formed College Football Playoff and/or the Rose Bowl, the Alamo Bowl, the Holiday Bowl and the Kraft Fight Hunger Bowl.

“The new college football playoff system has significantly altered the landscape in which all bowls are operating,” Crowson added. “In light of all of the changes that bowls are facing, we could not be happier that we are able to continue our strong partnership with one of the premier conferences in the country for the next six years. On behalf of the Sun Bowl Association, I want to thank the ACC and its member institutions for continuing that partnership. We look forward to hosting the ACC, its teams, fans and alumni in the future.”

The Sun Bowl has a legacy of providing top quality entertainment and exciting college football games. In 2011, the first overtime contest in game history came as Utah tied up the score with 1:32 left in regulation. The Utes responded to a Georgia Tech field goal with a touchdown for the 30-27 win.

This year’s game will mark the 80th anniversary of the Sun Bowl and is scheduled for Tuesday, Dec. 31 at noon (MST) at Sun Bowl Stadium. CBS Sports will broadcast the game for the 46th consecutive year.