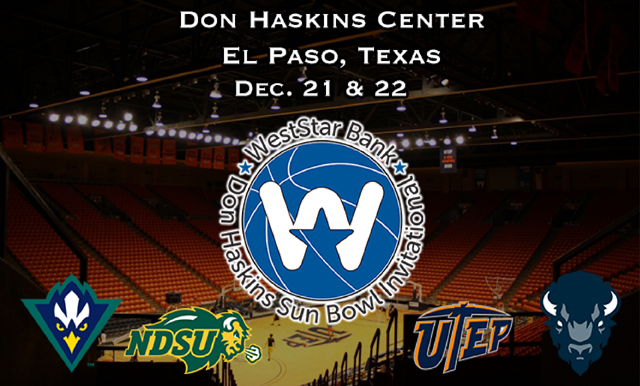 “We are excited to continue all the Sun Bowl festivities with our annual basketball tournament,” said Bernie Olivas, Executive Director of the Sun Bowl Association. “It’s always great to host teams from around the country and we hope the community continues to treat the visiting teams with the great hospitality El Paso is known for.”

UNC Wilmington heads to El Paso from the Colonial Athletic Conference and recently fell to Furman 90-84. North Dakota State took on No. 18 Arizona in Tucson and fell 83-53 on Monday night. Senior guard Paul Miller was the leading scorer for the Bison with 12 points.

Howard fell short against Jacksonville State on Monday, Dec. 18, losing 62-60. Freshman RJ Cole led all scorers with 27 points on 6-of-11 shooting from beyond the arc. The New Jersey product also racked up seven dimes and three steals in 40 minutes of action.

UTEP faces Incarnate Word on Tuesday, Dec. 19 before heading into the WestStar Bank Don Haskins Sun Bowl Invitational. The Miners (3-6) are coming off back-to-back quality wins over New Mexico and Washington State, but will be at less than full strength when they come off a 10-day break between games.

The WestStar Bank Don Haskins Sun Bowl Invitational is the oldest holiday basketball tournament in the nation. Tickets to the tournament can be purchased by calling 915-533-4416 or at the Don Haskins Center on game day.

In 2009, the tournament was renamed to honor former UTEP head coach and Naismith Memorial Basketball Hall of Famer Don Haskins. “The Bear” coached at UTEP from 1961 to 1999, winning 719 games and making 14 postseason appearances. Haskins famously led the Miners to victory in the 1966 National Championship game over Adolph Rupp and the heavily favored Kentucky Wildcats.