Arizona State Looks to Impress Fans in the Borderland Once Again December 6, 2017 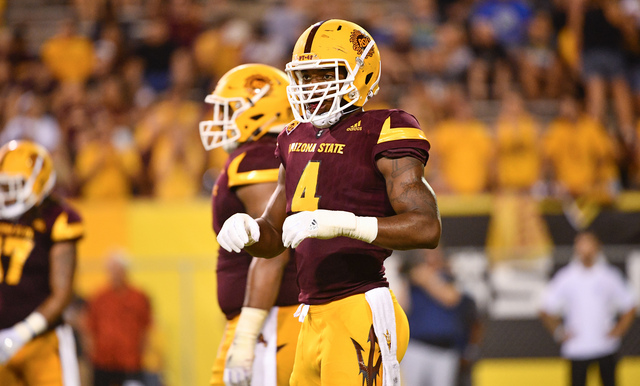 EL PASO, Texas – The road to the 2017 Hyundai Sun Bowl meandered throughout different periods of the season for the Sun Devils, but in the end, Arizona State (7-5, 6-3 in Pac-12) found success and has made a bowl game for the sixth time in the last seven years and the 30th time in school history.

No stranger to the Sun City, the Arizona State Sun Devils return for the sixth time taking on the No. 24 NC State Wolfpack in the 84th Annual Hyundai Sun Bowl.

The last time Arizona State played in El Paso was in 2014, where it held off a comeback by the Duke Blue Devils, winning 36-31. In 2014, they were ranked No. 17 and finished the season with a record of 10-3 in Todd Graham’s third season at the helm of Arizona State football.

Toward the end of their 2017 season, the Sun Devils were able to rip off two wins in a row, including a victory over rival Arizona. The Sun Devils look to ride the momentum of their two game winning streak as they head into the Hyundai Sun Bowl.

“Being a proud native of the great state of Texas, the Sun Bowl and the people of El Paso are very important to me,” head football coach Todd Graham said. “We enjoyed the fine hospitality of the Sun Bowl three years ago and we look forward to making the trip once again.”

The pitchfork of the Sun Devil offense is spear-headed by redshirt junior quarterback Manny Wilkins, senior running back Demario Richard, and sophomore wide receiver N’Keal Harry. Combined, the three players alone have accounted for just over 5,000 yards of offense.

Most interestingly, senior running back Demario Richard returns to El Paso with his eyes set on not only getting the win over NC State, but also earning the C. M. Hendricks Award, annually given out to the Sun Bowl offensive MVP, an award that Richard earned in 2014. In that game, Richard had 63 yards on seven rushes and five catches and chalked up four touchdowns, tying a Sun Bowl record held by Sun Bowl MVPs Thurman Thomas, Priest Holmes, and Brett Hundley. Richard finished his 2017 regular season campaign racking up 977 yards from scrimmage and 12 touchdowns, good for 30th in the nation.

The Sun Devils prove to be great on both offense and defense as being one of the only teams in the nation that scored 20-or-more points in 10 of their 12 contests while having a linebacker that is third in the nation in solo tackles.

The Arizona State defense, led by redshirt junior linebacker Christian Sam and redshirt freshman cornerback Chase Lucas, have helped the Sun Devils be ranked 17th in the nation in sacks.

Sam, the All-American candidate and focal point of the Sun Devil defense, boasts some gaudy defensive numbers. The linebacker ranks third in Power-5 Conferences in total tackles with 127 and ranks third in the nation in solo tackles with 87 while averaging 10.6 tackles per game, good for first in the Pac-12.

Lucas, a redshirt freshman, is a lockdown cornerback for the Arizona State secondary, ranking second in the nation amongst freshman cornerbacks with a 51.3 completion percentage allowed. Lucas is a Freshman All-American candidate.