By Josele Diaz
For the Sun Bowl Association

EL PASO, Texas – It’s no secret that the city of El Paso becomes overwhelmed with excitement every December in anticipation of watching one of the nation’s longest running bowl games. The Hyundai Sun Bowl has never been a stranger to talent loaded rosters along with big name schools playing in the contest every year.

With the Hyundai Sun Bowl announcement upon us, the chance to revisit the past five years of this longstanding tradition is here and with it, we can look back at how some of the players and teams from past games have gone on to have success.

The previous five Hyundai Sun Bowls have had a good number of players drafted into the NFL. You can imagine with big name schools such as Miami and USC that the number would be around 10. Maybe even 15?

For comparison’s sake, the Fiesta Bowl, one of the major bowls for all of college football, has had 48 players drafted in Fiesta Bowls played during the same time period, with the majority of the players (32) being drafted in the last games, coming from Clemson, Ohio State, and Notre Dame.

“When you come to the Hyundai Sun Bowl, you’re going to see some great football, and this stat alone proves that,” asserted Executive Director of the Sun Bowl Association Bernie Olivas. “Whether we’re in the first tier or second tier, we have a great game here. Not only great teams, but great football players too.”

Looking back at last year’s Hyundai Sun Bowl between Stanford and North Carolina, a total of eight players were drafted to the NFL, two of them in the first round (Mitchell Trubisky and Solomon Thomas) and one player drafted in the 3rd round (Jimmy Rogers Jr. Award winner Nazair Jones). 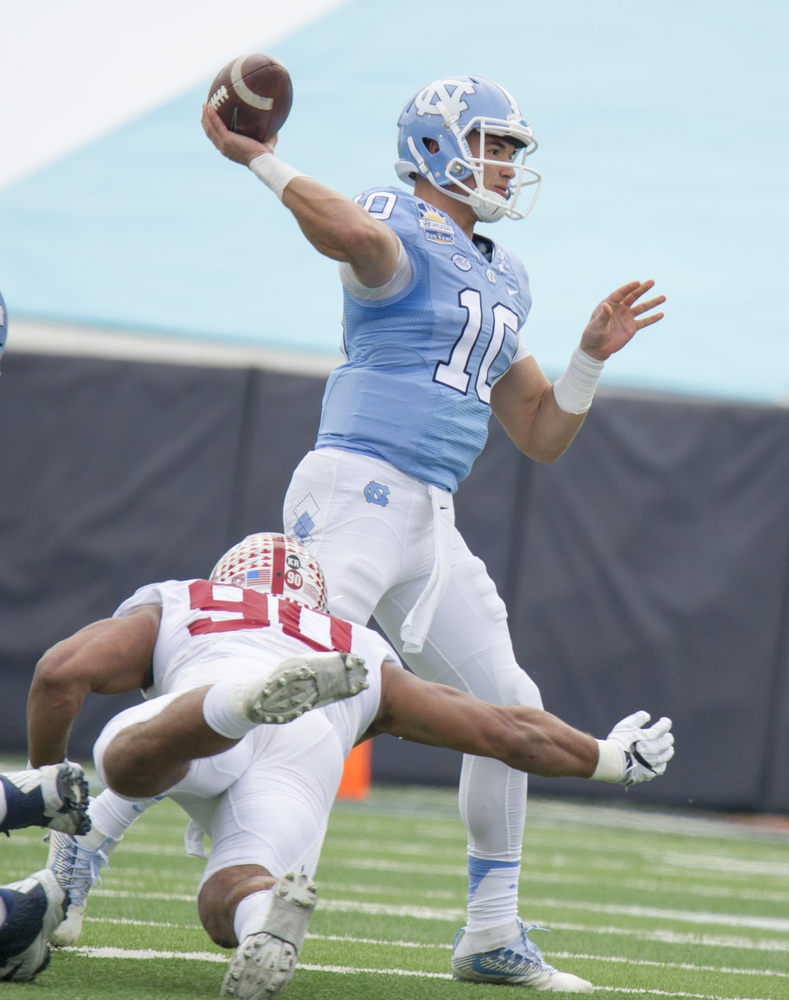 The 2013 Hyundai Sun Bowl featured many players that have made their impact in the NFL this year. UCLA linebackers Anthony Barr, Myles Jack, and Cassius Marsh are all linebackers playing at an All-Pro level while the UCLA quarterback Brett Hundley has filled in for All-Pro quarter-back Aaron Rodgers.

Olivas, a native of El Paso, was quick to point out that Brett Hundley won the C. M. Hendricks Sun Bowl MVP Award when he played here in 2013.

Going back to the 2012 Hyundai Sun Bowl, the USC Trojans who are referred to as college foot-ball royalty and are always centered on the main talk of the NCAA, had a slew of NFL talent on their roster when they made the December trip to El Paso. Coached by none other than Lane Kiffin, the 2012 squad had seven players who are all NFL starters in 2017. Their names include: Marqise Lee, Robert Woods, Cody Kessler, Matt Barkley, Nelson Agholor, Javorious Allen, and Xavier Grimble.

Not only do players who go on to play in the NFL give the Hyundai Sun Bowl a tremendous amount of credibility, but the past teams that play in the ACC-Pac 12 showdown have proven to be consistently successful teams. Teams such as Stanford, Miami, and Washington State, all teams that came to the Hyundai Sun Bowl in the past two years, were all ranked higher than 15 in 2017.

The talent that this game has seen pass through the Hyundai Sun Bowl is unmatched for a non-New Year’s Bowl. Washington State’s quarterback Luke Falk, who won the C. M. Hendricks Sun Bowl MVP Award in 2015, is a projected top draft pick in the upcoming NFL draft. Stanford’s running back Bryce Love, who racked up a total of 168 yards of offense and a touchdown last year, is legitimate contender for the coveted 2017 Heisman trophy, annually given to college football’s top performer.

Miami, who two years ago lost a snowy game against Washington State, is having their best season in recent memory as they are currently ranked No. 7 and are at the center of the discussion of which teams should play in the College Football Playoff for the chance to win the National Championship.

In reference to knowing Miami played here two years ago, Olivas is fine with being a ladder for teams to compete at the higher level. “We’re a stepping stone to future national champions and it really is cool seeing teams come to El Paso that go on to have future success,” Olivas said.

With a plethora of talent having played on the historic Sun Bowl Stadium turf in recent memory, it is encouraging to know that the skilled college football landscape will undoubtedly provide top-notch football once again.