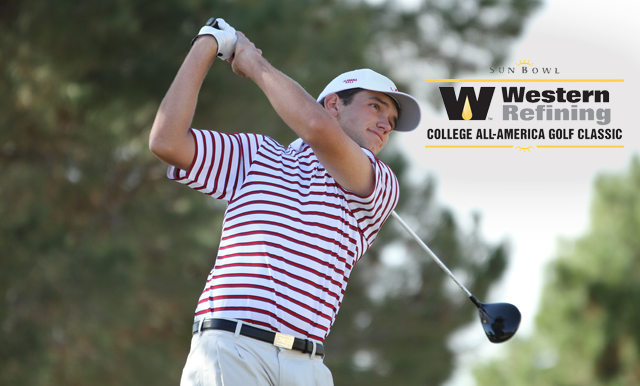 Twenty-one of the nation’s top collegiate golfers will make their way to El Paso when they take part in the 2013 Sun Bowl Western Refining College All-America Golf Classic on Nov. 23-26 at the El Paso Country Club.

“Western Refining is proud to team with the Sun Bowl Association in welcoming the nation’s finest college golfers to El Paso,” said Jeff Stevens, Western Refining CEO. “It is an honor to host one of the most prestigious college golf tournaments in the country. The quality of this year’s field is a testament to the hospitality of El Paso and the reputation of this event.”

The field includes 17 of the top 100 amateur golfers in the world, according to the World Amateur Golf Rankings including the top-ranked amateur, Cory Whitsett (Alabama), and the 2013 National Player of the Year, Michael Kim (California). Whitsett will be making his third appearance at the All-American Classic, he won the event in 2011.

Aside from Whitsett, the roster includes three other returning All-Americans from last year’s event. The top-four rated teams in the Golfweek/Sagarin Rankings: Alabama, Georgia Tech, Oklahoma State and California, all have two players in this year’s field.

Alumni of the Golf Classic have gone on to earn more than $1.6 billion and win 617 events on the PGA Tour. In all, 145 colleges and universities have participated in the tournament, raising over $730,000 in scholarship money for the participating institutions.

Each university represented by the Western Refining College All-Americans will receive a $1,000 scholarship.

Jonathan Garrick
UCLA • Sophomore
Earned honorable mention All-America honors as a freshman … garnered All-Pac-12 Freshman Team accolades … tied for second at the 2013 NCAA Regional … tied for fifth at the Pac-12 Championships in 2013 …
won the Cal Poly SLO Invitational … tied for fifth at the 2013 Southern Amateur and tied for ninth at the Western Amateur this summer … was a 2011 AJFA First Team All-American … took runner-up honors at the 2011 AJGA Junior Players Championship … plays for head coach Derek Freeman.

Brad Shigezawa
Claremont-Mudd-Scripps • Senior
Named the NCAA Division III Player of the Year after capturing the NCAA DIII individual title … a two-time DIII All-American … garnered SCIAC Player of the Year honors after earning medalist honors at the SCIAC Championships and both SCIAC regular season tournaments … tied for first at the Collegiate Invite at Jekyll Island … named an All-American Scholar in 2013 … took medalist honors at the SCIAC Championships and finished ninth at the NCAA Championships in 2012 … earned All-American, All-Region and All-SCIAC honors in 2012 … majoring in biology … plays for head coach Bim Jollymour.

Michael Weaver
California • Senior
Two-time All-American … picked up Masters and U.S. Open invitations following a runner-up finish at the 2012 U.S. Amateur … tied for first at the NCAA Pullman Regional … named to the All-West Region and All-Pac-12 First Team teams … finished second at the 2013 Pac-12 Championship … tied for second at the PING/Golfweek Preview … part of the 2013 Palmer Cup and Walker Cup teams … runner-up at the 2012 U.S. Amateur … finished second at the Players Amateur this summer … currently ranked 10th in the World Amateur Golf Rankings … majoring in business administration … plays for head coach Steve Desimone.