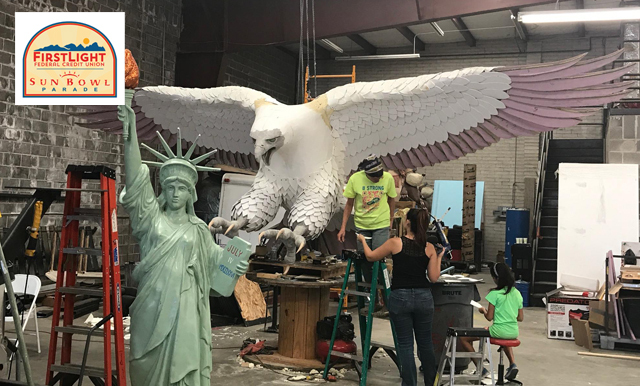 EL PASO, Texas – On the day before Thanksgiving, volunteers from around El Paso get ready to show-off the parade floats they have dedicated hundreds to thousands of hours of their time making.

The FirstLight Federal Credit Union Sun Bowl Parade draws more than 250,000 people from the region each year. They line Montana Avenue before sunrise for the best view of this Thanksgiving Day tradition. What they may not realize is that while they eagerly wait for the parade to begin, hundreds more people behind the scenes work to make it possible.

Sun Bowl Association Special Events Director Joe Daubach has been organizing the parade for the last 15 years and it’s a job that he cannot do alone. The Sun Bowl Association has seven full-time staff members, each a role in putting it together. Although, it takes many more people to put on such a grand event.

“I direct other folks, but when you really look at it, it’s the volunteers that truly make it happen,” Daubach said. “We have over 800 volunteers that put the parade together.”

From float builders to street cleaners, volunteers are the heart and soul of what keep the parade going. The Church of Jesus Christ of Latter-day Saints, alone, coordinates 600 volunteers. They wait at each block on Montana Avenue from Ochoa to Copia streets and clean them as soon as the parade passes through. Another 100 volunteers help keep the procession in order ensuring it runs smoothly.

Maruyi Hughes, of El Paso, has been a volunteer for the Sun Bowl Association for seven years now, building floats for her organization. Hughes runs the Edison Hope Leadership Christian Academy, a non-profit homeschool, and encourages her students and their families to participate in the parade. Growing up in El Paso, she remembers how special it was for her to see the parade as a child.

“When I was little, going to see the parade was like going to Disneyland. I remember when Mickey Mouse and Minnie Mouse used to be the Grand Marshals of the parade. We didn’t have much, but we had the parade to look forward too,” Hughes recalls. “I remember what it was like for me, so I do this now to give back to the community.”

Daubach is thankful for Hughes and her non-profit organization, and the assistance they provide for the parade. Involvement by non-profit groups are important to the Sun Bowl Association, since it is also a non-profit.

“I think that’s a really key part with some of these float builders, that they use it as part of a community service project,” Daubach said. “To be able to show the community what they do aside from their organization, it’s pretty neat that they get to experience that.”

Volunteering for the parade has become a tradition of its own for many. Many of the people involved with organizing the parade have watched the parade since they were children. Those people became volunteers because their parents and grandparents were volunteers. It’s a family tradition that continues to be passed from generation to generation.

Daubach was hired in 2002 and had never organized a parade, but he’s received valuable help from well-respected and treasured Parade Chairman, Jim Lawrence. Lawrence, who was born in Deming, N.M. and moved to El Paso at the age of three, has served as a mentor to Daubach these last 15 years, providing guidance throughout the organizing process.

“Having someone like Jim mentor me and explaining the do’s and don’ts, what to focus on, what not to focus on has been invaluable because he’s lived through so many parades,” Daubach mentioned. “He really knows how to do things that help not only me, but everybody.”

Lawrence has been involved as a volunteer with the parade for 48 years, and has seen the parade in different stages of its life. From a young boy standing on the sidewalks, watching the parade in awe, to designing and building floats, the parade remains special to him.

“It’s in my blood. Being involved with the parade all this time, I’ve seen many floats, many specialty units, and it’s special every year,” Lawrence recalls. “It’s a parade centered around the community, and I think it makes families and children really happy to come out each year and see what we’ve put together for them.”

Sun Bowl Executive Director Bernie Olivas has worked with Lawrence for many years. He’s grateful for the dedication Lawrence continues to provide for the Sun Bowl Association year-after-year. Before Lawrence was appointed Parade Chairman, he was set to retire as a volunteer, until Olivas convinced him otherwise. Lawrence is an irreplaceable asset to the organization.

“Jim is an invaluable person to the Sun Bowl Association,” Olivas mentioned. “He’s just a tremendous individual and if he had left us before Joe took over, I honestly don’t think we’d have a parade. That’s how valuable he continues to be for this organization.”

“There’s no way seven people can put on the events, not just the parade, but all the events we have. We depend on every volunteer that help us throughout the year,” Olivas says. “We couldn’t exist without their help. These volunteers who ask nothing in return just want to contribute to the community, and of course the Sun Bowl Association is all about putting on community events. Without them, we wouldn’t have a job.”

The 81st Annual FirstLight Federal Credit Union Sun Bowl Parade kicks off on Thursday, Nov. 23 at 9:45 a.m. (MT) on Montana Avenue between Ochoa and Copia streets and will also be televised locally on KTSM Channel 9. The theme for this year’s parade is American Folklore. A fitting theme for the volunteers, because what’s more American than giving back to the community? 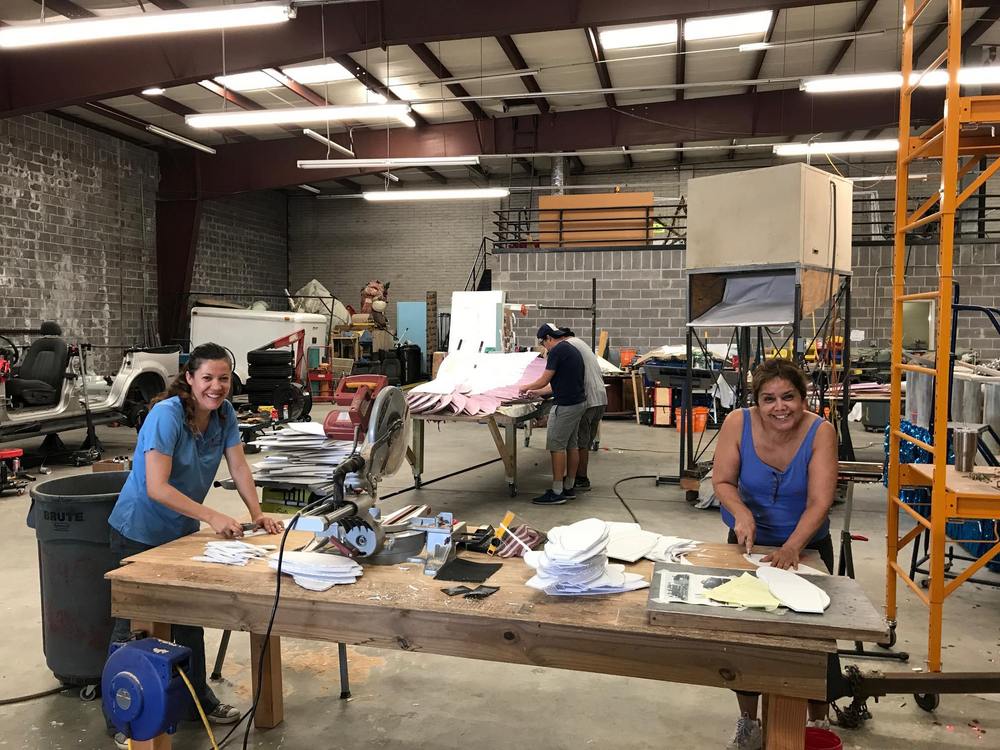 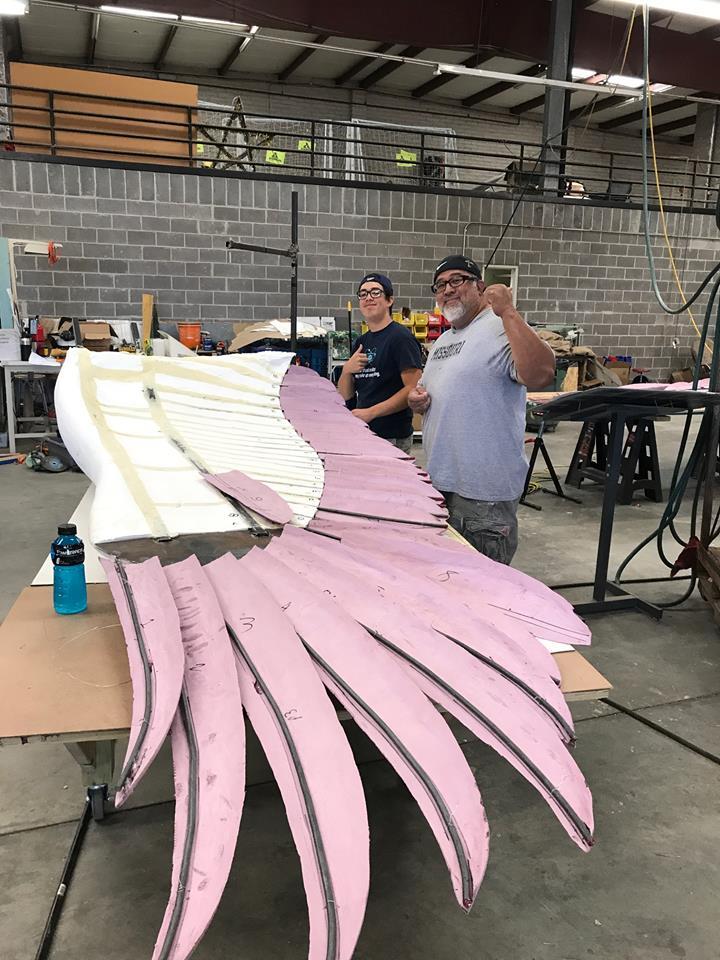 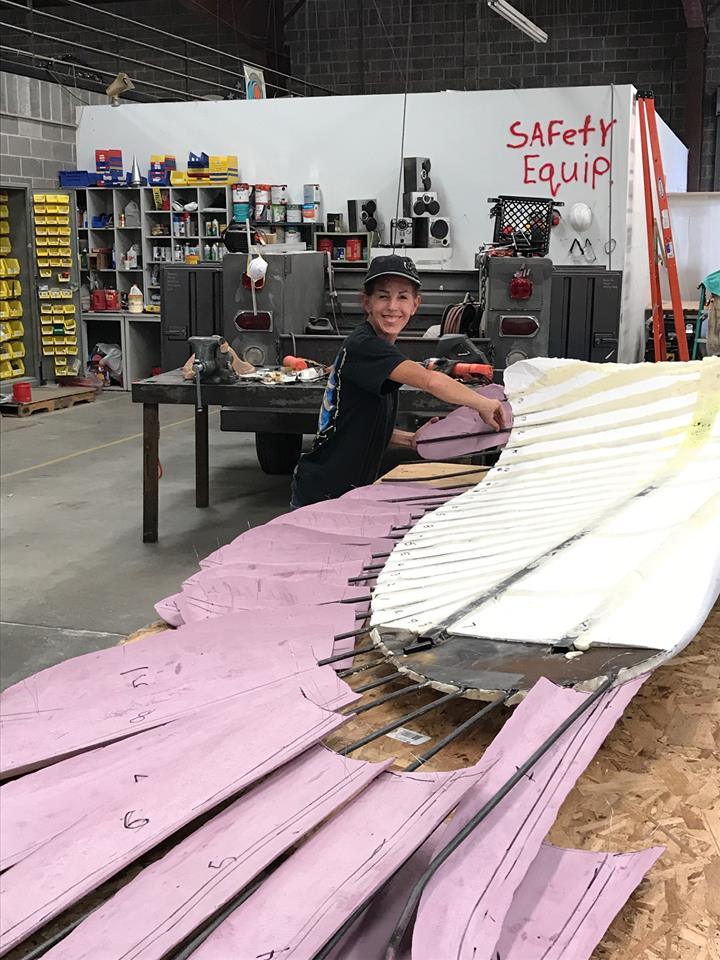