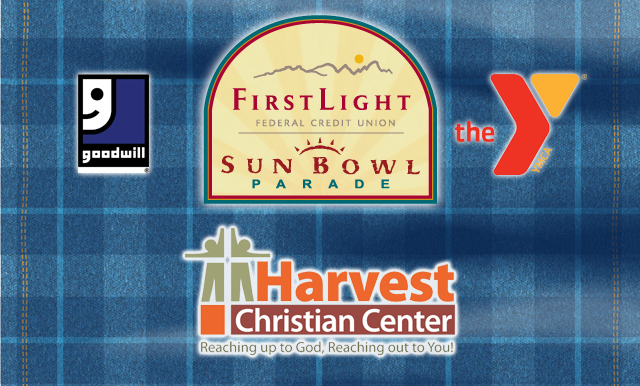 Local businesses and organizations joined forces to collect 34,093 pounds of clothing for the 2013 FirstLight Federal Credit Union Sun Bowl Clothing Drive that will benefit the Goodwill Industries of El Paso and local charities.

“We are appreciative for the support we received from the local community in this year’s clothing drive,” said Ruben Batista, President and CEO of Goodwill Industries of El Paso, Inc. “The generosity of the El Paso and Las Cruces communities will go a long way to support the benefitting charities.”

For the second consecutive year, Harvest Christian Center was the top contributor to the clothing drive by collecting the most pounds of clothing and will be awarded a prebuilt Thanksgiving parade float.

FirstLight Federal Credit Union members and employees collected over 5,200 pounds of clothing to help support the clothing drive as the major sponsor of the Thanksgiving Day parade.

“The clothing drive provides an opportunity for local businesses and members of the community to come together to support El Paso and Las Cruces, said Karl Murphy, President and CEO of FirstLight Federal Credit Union. “We are extremely grateful for all the support that has been provided and I would like to express thanks to all those who have participated in this event. FirstLight Federal Credit Union is excited about the opportunity to give back to the community through our clothing drive again this year.”

This is the fourth year FirstLight Federal Credit Union, the Sun Bowl Association, the YMCA and Goodwill Industries of El Paso have teamed up to give the annual Thanksgiving parade, now in its 77th year anniversary, a way to give back to the community that has made the parade the most attended event in the Sun City.

In addition to awarding a prebuilt float to Harvest Christian Center, two organizations will be given a chance to participate in the Thanksgiving day parade. The St. Patrick’s Cathedral School and Western Technical College all collected over 2,500 pounds of clothing.

The vouchers are to be used by clients of these charities to purchase personal goods from Goodwill stores.

Clothing is still being collected to support the clothing drive effort throughout the holiday season at all Goodwill locations.