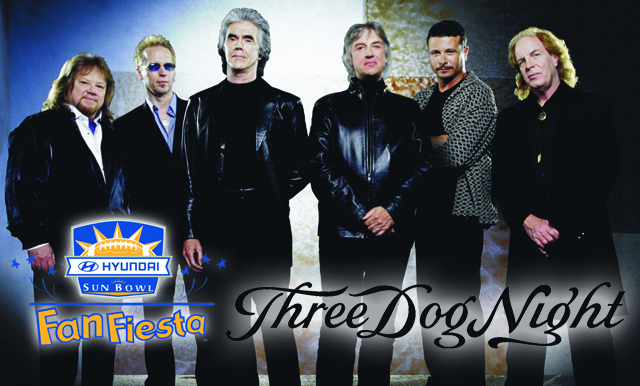 Hyundai of El Paso and the Sun Bowl Association are proud to announce Three Dog Night as the performing act for the 2013 Hyundai Sun Bowl Fan Fiesta at the Judson F. Williams Convention Center on Monday, Dec. 30, 2013.

“We are delighted to have Three Dog Night perform at this year’s Hyundai Sun Bowl Fan Fiesta” said Oscar Leeser of Hyundai of El Paso. “This Grammy-nominated group transcends music generations and that is why we decided to have them perform an hour-long concert at the Fan Fiesta.”

With Three Dog Night performing on the eve of the 80th Hyundai Sun Bowl game, a high school band will be given the opportunity to perform a routine during halftime on Dec. 31.

“A high school band performing during the Hyundai Sun Bowl game pays homage to the history of the game,” said Bernie Olivas, Executive Director of the Sun Bowl Association. “The first Sun Bowl game in El Paso featured the city’s top high school players, the El Paso All-Stars, against Ranger High School. Bringing in a high school band to march on the field during the 80th edition of the game is a special way to recognize the beginning of this football tradition in El Paso.”

The high school band will be selected from the participating bands at the 77th annual FirstLight Federal Credit Union Sun Bowl Parade on Thanksgiving Day, Nov. 28.

About Three Dog Night
Three Dog Night will perform a full set beginning at 7:15 p.m. at the 17th annual Hyundai Sun Bowl Fan Fiesta that begins at 4 p.m. and ends at 9 p.m. with the largest fireworks display in the Sun City.

Initially brought together by Danny Hutton and Cory Wells, Three Dog Night recorded the music of songwriters of their time including Harry Nilsson, Randy Newman, Elton John, Laura Nyro, Paul Williams and Hoyt Axton among many others.

The band, which is made up of Wells and Hutton on lead vocals, original band mates Jimmy Greenspoon (keyboards) and Michael Allsup (guitar) and completed by Paul Kingery (bass and vocals) and Pat Bautz (drums), performs over 75 shows a year, re-creating their larger than life songs, including “Joy to the World”, “Shambala”, “Mama Told Me (Not to Come)”, “One”, “Liar”, “Black and White” and “Celebrate”.

Their now-famous name came from a story about Australian hunters who, on cold nights in the outback, sleep with their dogs for warmth; the coldest evening is a “three dog night”.

High School Band Halftime Rules
To be eligible your high school band must:
•Submit a parade application by no later than Wednesday, November 13.
•Participate in the FirstLight Federal Credit Union Sun Bowl Parade held on Thanksgiving Day Thursday,
November 28 starting at 10 am.
•Submit a DVD of a 5-6 minute halftime performance with your parade application. The performance must be from the current school year.
•Your band must march in full uniform attire.
•You band will be judged on the following criteria: presentation, marching, quality of sound and your DVD entry.

The Hyundai Sun Bowl Halftime Guidelines for the winning band:
•Each band member and director will have a reserved seat at the football game. Friends and family will have to purchase a ticket.
•The band that performs at halftime must be the same band that enters the parade and is seen on the DVD.